I found this today on the internet, everyone has  heard of the North American Veeblefetzer Co. who was the sole maker of Veeblefetzers here n the USA until going out of business in the 70’s. This should be of interest to my buddy Al Bossence in Bayfield On.I just found out that Royal Canadian Veeblefetzer had a small plant in Flusherville Ontario just outside of Toronto. They were taken over by the Toronto Mossmagator Works. until going out of business, this explains the Mossmagator sightings in the southern Ontario area. Al I also found a picture of their company logo, here it is
Just a small bit of information for my friends. 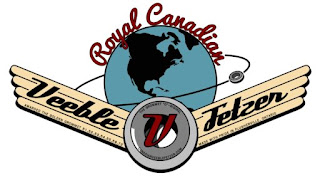 Today we started new week with a nice sunny day and temps n the 70’s, Donna is feeling better and having a pretty good breathing day.
I’m just grumpy, sometime this weekend while the kid’s were camping Charlie stole my moccasins I had two pairs and would you know it I found  two of them both left shoes, have still not located the two rights. These were basically the only shoes I could  squeeze on my swollen feet. so  have to find before going out.
That’s about it for today, be sage out there, Sam and Donna..
Posted by Sam&Donna Weibel at 2:45 PM