A WALK BACK IN TIME

Since I have ‘retired’ I have a little more time for some things.  Until the last couple of weeks I had no interest nor time to invest in a Face book account, but now I have one. Started looking up old classmates and reconnected. Martha suggested we get together for lunch as Linda who lives in Tampa was going to be in town, turns out her husband owns a business here in O’Fallon so we met at the restaurant where I work. I knew we could get a table out of the way, stay as long as we wanted without a waitress wondering when we were going to get out of her station. We had a wonderful time, got caught up on the rest of the class. Martha has stayed in contact with many of them. Sad to say we have lost many from our small class. I have promised to go to the reunion in October. They wondered why I haven't gone to any but one of the others. I explained, I went to the 10 year and hated it, just like high school. Popular kids only talking to other popular kids, jocks with jocks, and the rest of us out in the cold, told them I decided then and there NO MORE REUNIONS.  They convinced me it is different now, that as we have all aged that there is no more of the one upmanship that there was at the 10.  And of course my head is a little bigger now since they told me I haven't changed since high school, of course the one did admit she has macular degeneration, so that probably accounts for the statement :-).

Other than that not much going on here, unbelievable that it is July in Missouri and it was 65 this morning and the high for the rest of the week is going to be 85. Normally this time of  year it is about 100. 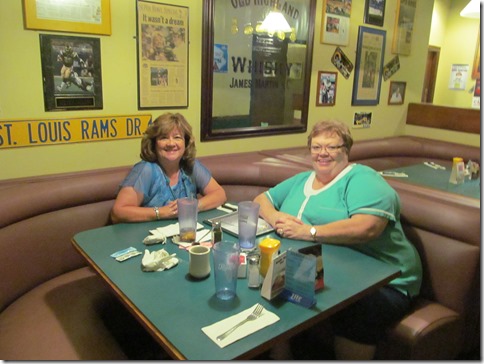 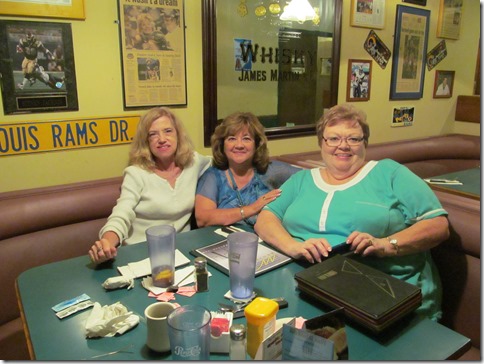 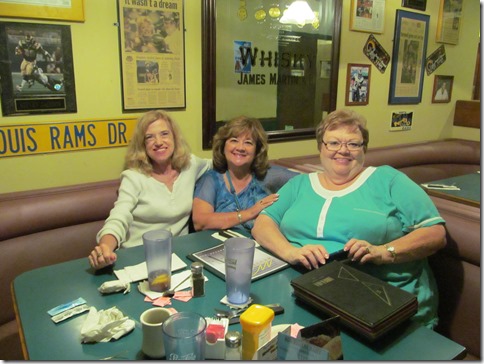 The three of us.

Now for the utterly ridiculous. Was watching the morning news and a story came on that a local pastor is having a gun buy back program…what’s so unusual about that? Well the buy back is from kids with their plastic guns and water pistols. That these toys only promote gun violence. Now how many of you had toy guns and pretended you were the Lone Ranger or Dale Evans? And none of my toys were neon green and orange, they actually looked like guns, and I didn’t become a serial killer. I also had, now hang onto your hats, a BB gun!  Only heaven knows why I grew up not shooting up my neighborhood or bank with such weapons. In fact I have a water gun right next to me now. You see it is very effective on Riggins when he decides to bark at a leaf blowing, he loves water but hates getting squirted.  If I’d didn’t have the luncheon today I was tempted to go to the dollar store and buy a bunch, a pack of 3 is a dollar, drive to the city and make myself a nice profit selling them to this nut.  As Karen pointed out what's next, cut off children's index fingers so they cant pull a trigger, or Donna K said she could see how they could be dangerous, a kid might hit another one in the nose, water would go up his nose into his lungs and he could drown.

Hope everyone is having a good day, as Sam says Be careful out there.

Posted by Sam&Donna Weibel at 5:55 PM