Haven’t posted for a few days, but that is only because there just isn’t much new here at the Weeb Ranch. Donna worked yesterday and is off today, then she works Tues, and Wed. Just got back from a quick run to Shop and Save for a few groceries plus some beer and soda. All the fur kids are doing fine, Even Charlie, he is starting to mellow ever so slowly, he now sits at the door when he has to go and and hasn’t had an accident in the house for quite awhile. He is getting to be quite a bed hog, I have to shove him to the bottom of the bed, but once he conks out he sleeps all night. Sadie just burrows under a pillow and doesn’t take any space. Donna s still fighting her breathing problems, she is spending more time on her oxygen machine. Today she went into to talk to her Manager at Walgreens and he said they were all worried about her, and she asked if she could get a 60 day leave and see if she could get some improvement, he said that is was a great idea and he would put paperwork n so she won’t lose her benefits.She will still have to finish out this week.

Maybe later next month  we can head south for a short vacation, her oxygen machine will fit in the fiver nicely, plus I have a tank n case of power failure and the generator.

Glad to see a lot of our friends had fun at the Blogger’s meetup at Quartzite, wish Donna would have been up to that trip.

That’s about it for today, Be safe out there. Sam and Donna.

Got a nice sunny but cool day going here in Dardenne Prairie. supposed to be a high of 50 degrees today,so far January has been a pretty good month, no where near the snow we had last year and not quite as cold, only a few below zero days. Another month in the middle of February it will start to warm up a little and by mid March we will see a lot of nice days.
Donna has to work the evening shift tonight at Walgreens, she took off Sun, Mon, and Tues. to work on her breathing, so she has decided to see how she does tonight.
The fur kids have been behaving, even Charlie seems to be making good progress, he really likes it when you tell him he is being a good boy and give him pets and hugs for it. Now when I am working on the laptop at the kitchen table, I have two of them, Rigg’s and Charlie laying on my feet. Charlie is like Riggs and likes to have contact against you. At night Charlie gets on our bed and sleeps between Donna & I, and Sadie burrows under my pillows next to my head and they both sleep the whole night like that.
Here’s a couple of Grand pics. 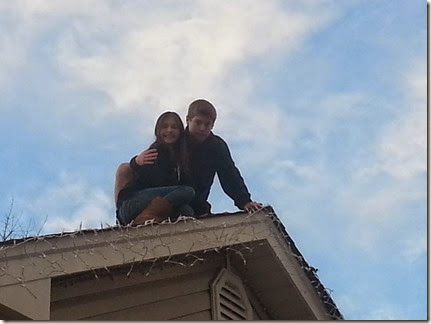 Grandson Adam and his girlfriend Natalie taking down Christmas lights.
Don’t see much of Adam since his Mom and Dad aren’t getting along, he is still living in Warrenton MO. He is getting big though 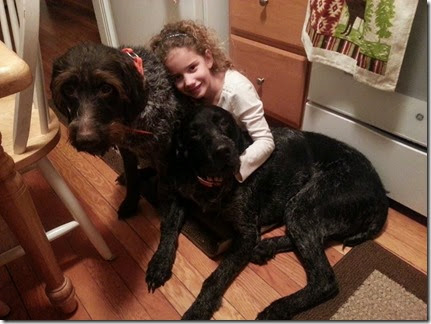 Here is Meghen in New Jersey with their two dogs Raina & Lugar.
The Jersey girls are enjoying hunting and other outdoor sports and of course their two Horse’s.
It doesn’t look like we will be making it to Tucson for the Escapade this year, Donna is just wore down with her breathing problems, Maybe in March we will head to Texas and visit Niece Tammy and Florida for a few weeks, and then later in the spring we may go and visit Donna’s Niece in Indiana and then her Nephew in Ohio. Just have to see what life brings us.
Either way I know Rigg’s is looking forward to another road trip. That’s about it for today, Be safe, Sam & Donna……..
Posted by Sam&Donna Weibel at 10:32 AM 3 comments:

For awhile Rigg’s has been  asking to have some blog time, so I finally said yes.

For over a year I was the top dog, I was the only dog, then you allowed Sadie to come live with us

Ok I put up with her biting my ears jumping on me and acting like she was the big dog of the house. Heck I even used to let her win at tug 'o' war. We became buddies, after all I have to look after someone so small.

I know Riggs you have always watched out for her, you even saved her from that hawk.

Everything was going along just fine, WHY WHY did you let them bring Charlie to live with us?.  Well Riggs he was homeless and needed someone to take care of him and love him.

But Mom, he has torn up all of my toys!

He even tore up my bed.

Now I like to play too but he doesn’t play fair, he jumps on my back and bites my head and ears. Let me tell you puppy teeth hurt!

Charlie, I am not a horse you cannot ride me.

And then when he gets tired he just sits on me like I am his personal chair.

I try very hard to play nice, why can't he?

I know Riggs you are mommas good boy, you never take advantage of ones smaller than you and you put up with a lot.

Then Mom you got me a nice new bed, but before I could get to it Charlie took over.

Well in his defense Riggs he only took a corner, there was still room for you.

But MOMMM, it is MY bed! Why should I have to share?

And now he sleeps in your bed. He sticks his head over side of bed and taunts me because he knows I cant jump that high any more since I hurt my hip. I know Riggs, but didn’t I yell at him for that and tell him he was a bad dog?

And Mom what about all that barking? And he doesn’t have a big boy bark, it hurts my ears. Well Riggs we are hoping as he gets a little older his bark will get deeper and less often, I know it hurts my ears too. And another thing, why does he always get to go outside before I do,sometimes I have to go bad, but he gets to go first?  Well Riggs that's because he is still a puppy and if we don’t put him out when he lets us know he goes in the house and that is not good.

Well I guess we are a family and we have to put up with each other, but boy its not easy being a big brother.

Oh and Mom thanks for not yelling at me when Charlie jumped on Sadie and made her cry. I couldn’t help it I had to go over and growl at him and let him know he cant hurt her that's not right.

But honestly Mom when are we going on a road trip so I am top dog (only dog) again?

Rigg’s Mom & I both love you guys all the same and you are the lucky one that gets to go on trips and guard the 5 th wheel with us.

That’s about it for today, Be Safe. Sam & Donna.

Haven’t had a post in several days, just with all the freezing temps we have been having we just don’t go out unless it’s for Donna to go to work, or for me to make a store run.It should reach into the high 20’s today it is now 24 degrees. The fur babies are doing fine, Charlie s recovering fine from his procedure. Hard to tell if he has discovered anything missing.

My Son Tim and his girlfriend Bonnie and the Grand girls in New Jersey had a successful pheasant hunt on the coldest day of the year so far. 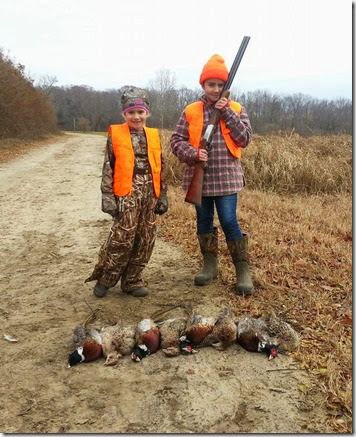 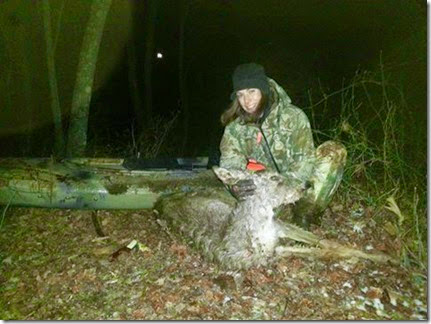 Bonnie and the doe she bagged.

They all really enjoy the outdoors and hunting and fishing. 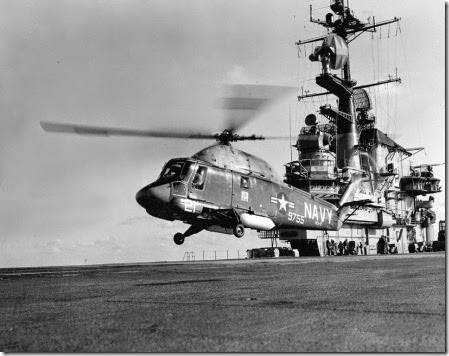 A blast from the past. One of our H2’s taking off from USS Franklin D Roosevelt on a Det I was

Donna is off today, she will have to work the evening shift tomorrow.

Nothing much doing hope all is well with all our friends out there. Be safe. Sam & Donna……..

We are still in the deep freeze here in Dardenne Prairie. The high for today is 20 degrees, the low set for 9 degrees, looks like at least a week of below normal temps are n store for us.

Charlie came home from the Vet yesterday after being neutered, he pretty much laid around and moped on his bed all day. Today he s more active and being more of his old self. He took a nap with his Grandpaw this afternoon for about an hour.

Had to make a run to Schnucks Mkt to pick up a prescription earlier, boy even with it in the teens it was cold outside, I was glad to get back to the Ranch and a nice warm house. Donna is off today and tomorrow and will go in on days on Sunday.

Got up to a dusting of snow this morning, The high today is supposed to be 10 degrees, with a low of 0 degrees, and wind chills may reach –20 degrees. I will have to make a quick run to Shop & Save for some essentials like Milk, eggs and bread, Also beer and soda. Don’t look forward to it in the cold. Rigg’s doesn’t seem to mind being out and stay a half hour or so before he decides to come in.Donna has to work the evening watch at Walgreens tonight, then she off till Sunday, unless they call.

Other than shopping nothing else much going on. Andy & Samantha took Charlie to the Vet to be neutered today, he will have to spend the night, He’ll be home tomorrow albeit a few ounces lighter than when he left. That’s about it for today. Be safe out there. Sam & Donna…..

WE are in a cold alert it never got above 20 degrees today and is going down to the low teens tonight. It was supposed to snow, but so far nothing,Donna had the day watch at Walgreens today, I am waiting for her to make it home.All told just a lazy day with me and the pooches just sitting and laying around most of the day. Hope  all our friends are dodging the cold weather, although this is normal for us at this time of the year. Be safe out there. Sam & Donna….
Posted by Sam&Donna Weibel at 4:31 PM 5 comments: 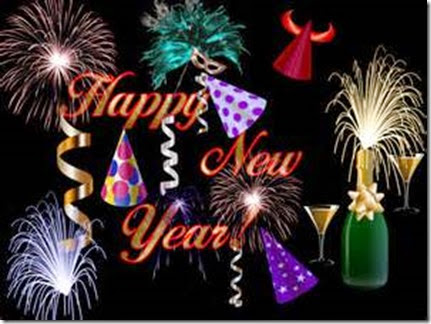 It’s finally here, The New Year, A Happy New Year to everyone. I guess we all get to start with a clean slate for the year.I am hoping we have warmer weather and better luck with our health than last year.

Donna had to work the evening shift last night and didn’t get home until 11PM. So we just rang in the New year watching TV in Bed. She was tired out from work.

Charlie jumped up on the bed and wormed between us and slept the entire night there. He is getting to be a bed hog.

Donna brought home a small indoor doggie house for Sadie to sleep in where the big boys won’t bother her. I named it Jaba the Hut.

Donna is off for the next couple of days but it is supposed to continue to be very cold. Hope all our friends had great Holidays, Be safe, Sam & Donna….