Another sunny weekend, Yesterday (Sat) it was in the60’s and sunny, just a nice spring day, today (Sun) it is still sunny but we will be lucky to get to 35 degrees and for the next week the highs will be in the 30’s and lows in the single digits. Wish that jet stream would head north again.

Anybody know if those Alberta Clippers are 4 engine jobs, thought I heard one fly over the ranch last night, almost sounded like a 4 engine turbo prop Orion. That was when the temperature dropped 30 degrees in an hour.

Donna has the day shift today at Walgreens, My Son and I have to replace the cable on the dog run the one end broke the clip off. It’s tough to find the heavy duty ones for dogs over 100 pounds, not only that, but they are not cheap, about $30. I usually get about a year or more before the cable inside the plastic starts rusting, but this one the snap broke off of the end piece.

Rigg’s is happy now he is outside on his new cable on the run, the run goes from the back of the house above the door  about 200 feet back in the yard to a large tree, I had to put large eyelets into the house and the tree to hold the force of our 100 lb dogs pulling on it. Rigg’s especially when he see’s the feral neighborhood cat. or the woodchucks. 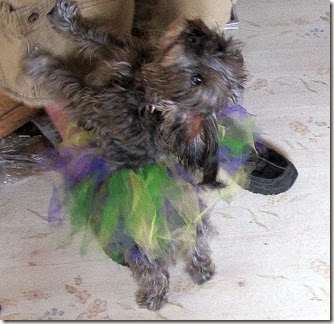 Sadie dancing in her tutu.

That’s about it for today, I hope all our friends down south are having warm days. Be safe out there. Sa, & Donna………