Was up at 04:30AM with my bride for coffee, then she was off to the truck company.
Last night at supper time, our cook station on the island decided to act up, It has an exhaust fan built in in between the main burners, ( its an electric stove) for several years the switch for the fan has been catching and you might have to hit it several times to turn the fan on and off. Last night when we were done no matter what we tried the switch would not turn the fan off, I finally shut the power off at the breaker and took the switch out and and taped the wires.
This  morning I spent 2 hours and went to four places only to be told the same it is not available any longer, no longer made , no supplier or replacement that will fit.
I came home and went to Jenne Aire Parts on the computer with the part number and after checking a dozen supply sources, I got the same answer, not available from any source. What to do now, I came home looked at the square hole in stove. Then went and got a small piece of black plastic sheet and trimmed it and glued it over the hole, Doesn’t look bad, The way the cook station is wired when the burners on the right are used the fan comes on anyway so we will live with that. 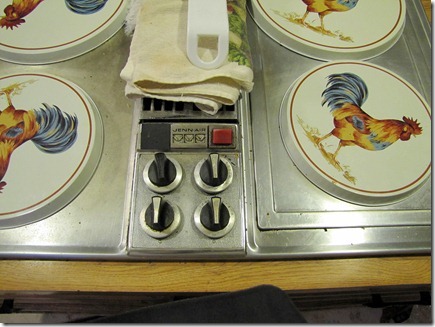 Sam’s fix.
Today was a cold cloudy drizzly day all day here in Dardenne Prairie soon as I was done with my running I put the truck in the garage, and watched a train movie.
Rigg’s was content with staying in most of the day, and even napped while my movie was going. My Son Andy and Samantha made the weekly grocery run. So we are set for a little while.
Hope all is well for everyone out there. Be safe out there. Sam & Donna..
Posted by Sam&Donna Weibel at 4:28 PM