Rigg’s and I slept in until 06:00AM, had my coffee and Donna got up and got a cup a little later.

Adam slept late because he stays up late when he can get away with it, like and Grandpa & Grandma’s on the weekends.

When I picked him up at the bus stop. I asked him if he had heard about the school in Connecticut. and he said no. I guess all the other schools kept it quiet and left it up to parents to tell their kids about it. That was a good idea in my opinion. Adams Mom had called me on the way to the bus stop and asked me to tell him because she was so upset over it. We drove slowly to his house and I told him that 20 kid’s his age had been killed in a grade school just like his by a crazy man. I said we can be thankful for only one thing, and that is that he was safe. He was very quiet all the way to his house. When we got to his house I saw his Mom’s car there so I said make sure and give her a big hug and tell her you love her, if she doesn’t want you to leave for the weekend I will understand. He said I hope she will let me go, I really wanted to spend the weekend with you. Last night, two or three times he came into the kitchen and gave me a hug and told he was so glad that the shootings didn’t happen at his school and all his friends and his girlfriend Natalie were safe. I said why don’t you call Natalie, and he said I already did and she was crying. I said that is the way people relieve their grief when terrible things happen and there is nothing to be ashamed of by crying, I said when Grandpa first read about it he had tears in his eyes for all the parents, and so did the President when he was told about it. Adam Looked at me and said me to Grandpa.

Today Rigg’s got his new correctly sized vest, it looks really good especially with his two Navy patches on it and his name. Wait until his girlfriends Coco, Jodie & Sandy see him strut his stuff in his vest.

Pizza night went fine, the dough was especially tasty and Adam had some for lunch today. He is getting so big and boy can he eat. 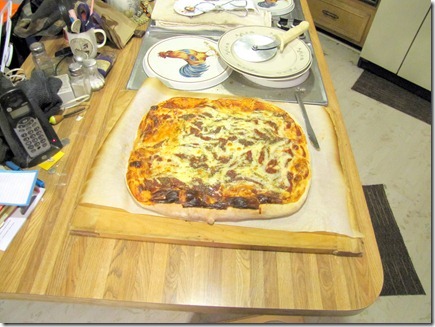 Hoping all of our blog friend are having a great weekend, Today turned out to be a pretty good day for December in Dardenne Prairie. It was sunny with a high of about 60 degrees. Hope our luck holds out for another mild winter like last year.

Posted by Sam&Donna Weibel at 3:38 PM