After a two day break from posts we’re back.  Nicky went home yesterday, and there just wasn’t nothing going on, so we took a break. No pizza last night, forgot to take the dough out to defrost.

This morning when Donna was pouring her coffee,she said come here, we have the first new tenants looking at the new & improved bird motel. Looks like they are interested in the ground floor apartment. 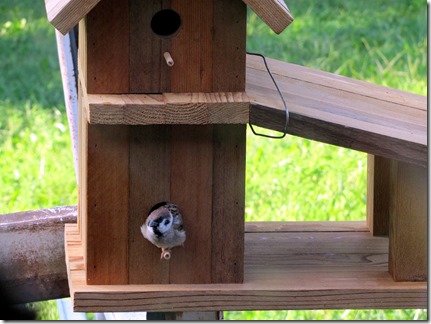 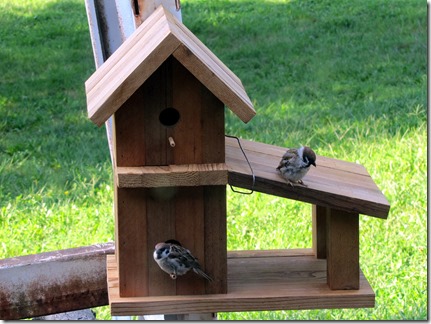 Hope they like it, it’s a lot roomier than the old one that was falling apart.

Donna got a new machine to help her with her breathing problems(CPAD). It is called a Nebulizer, sounds to me like something that re arranges your cells and transports you to the Mother Ship in orbit. 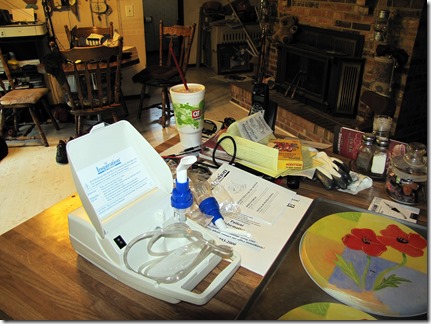 Hope it works, maybe she will visit Alice Kramden on the moon.

We are having just gorgeous weather here on the Ranch considering it is mid August. Morning temps in the low 70’s and highs in the mid 80’s. Couldn’t ask for better.

Rigg’s is hoping that we will take him to the doggie park for a swim, he was out playing with Sadie in the back yard this morning, but I know he wants a good run and a swim, Donna said tomorrow when she is off we will take the two of them. Rigg’s makes it into the Lake in flying leaps, Sadie will only get her toes and belly wet. But they both seem to enjoy the leash free environment. Rigg’s makes sure none of the bigger dogs get to rough with his little sister, although Sadie seems to hold her own for only 7 lbs.

Hoping for a chance to get away for a few days, all depends on how Donna’s breathing is doing,although now we can take her machine with us.

Had the truck over to Wal Mart Thursday, I had a leak in the right rear tire, and it was due for an oil change and grease job. Luckily when I bought the tires I paid for road hazard coverage, That saved me 20 dollars as the repair was free. But they make up for it on a diesel 4x4 oil change. Seems like everytime I have it done it is more expensive. used to be $55, now it is $75. But now it is ready to go for the next towing adventure.

Posted by Sam&Donna Weibel at 9:53 AM