Apparently Mother Nature lost her play book, this is May you know warm days sunny skies.  Has rained all day and only reached 50, so no sitting outside and socializing.

Last night the chairs of the parking/security teams had a potluck dinner. What great food and everyone turned out. As  you all know Sam is a pizza and pasta guy, so I was in heaven to get salads, fruit, bbq and sweet and sour meatballs etc etc. I made a bastardized black forest cake and an apple sugar free cake. There was also banana pudding, boston cream pie (my favorite) and someone bought a huge sheet cake for a couple who were celebrating their 35th anniversary and her birthday.  Bet you’ll never guess which dessert only had two pieces taken, the sugar free one of course! 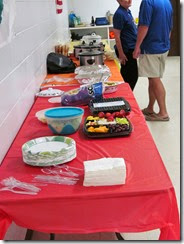 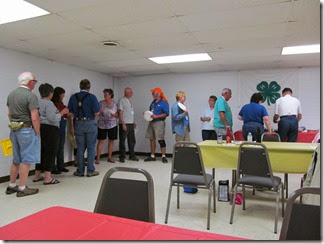 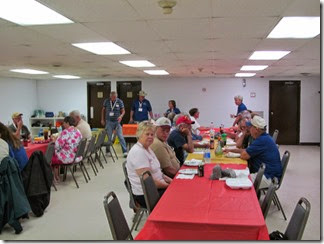 Bridget Hatch received an award for getting mud on her golf cart! If you’ve never met her, there is sweetness and laughter all bundled up into this tiny little thing. Would guess she is less than 5 ft tall. She had an 8 passenger cart no power steering and drove it for 8 hours a day. She shuttled us to our posts in the morning, kept going around all day to take people to bathroom breaks, lunch breaks, bringing cold water or whatever else you needed. I am guessing she now has the pecs of Schartzeneger from manhandling that cart all day. 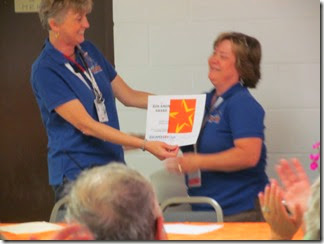 We were second from gate. The greeters met people as they came in and gave them their information bags and told them about registering. Dave (aka Mr. Happy) and  Rob when they found out someone was a first timer they did their happy dance never able to get a pic of that.  They were a riot to work with. 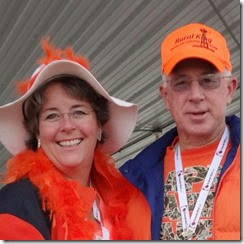 Dave and his wife Michelle. She always has a smile on her face and has her hat and boa. 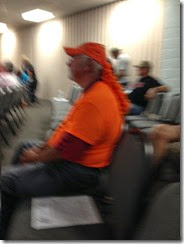 Not to be outdone by a boa…orange dreadlocks!

Our job was to direct people which way to go depending on whether they were full hooks, handicap, elec only etc. If they had a toad they had to pull over and disconnect before they went any further as units are too close together to be unhooked at sites. Had a couple of people that didnt quite understand pull as far to the right over there as you can get so others can pass. But other than that everyone was great. We also had to make sure no cars or trucks went out the gate the rigs were coming in as some are very large and had to make a wide turn in. There was a small side road  maybe 50 ft long that let to another gate out. Of course you’ll always have the one. This guy even though I was standing in the middle of the road waving my orange flag for him to go strait starting turning right at me. Went over to his car and told him he had to take road to exit. “Why, I dont want to, I want to go out the same way I came in” “Sorry sir but you have to go out the other way. The entrance is on a curve and if a rig turns in when you are up there your car is no match for an RV’' “Well then they need to pay more attention and learn how do drive”  “Well sir when your car is all smashed up you can tell them that. In the meantime you ARE going to go where I told you to”  expletives deleted he did what I said. The customer service people who were across the street were laughing and said your smile didnt leave your face the whole time you laid down the law.  3 times he came and went , 4th time I told Sam I’m not dealing with him again,  your turn. Sam planted himself in front of car, guy frowned shook his head and went the right way, but not before giving Sam the one finger salute.

Considering we dealt with hundreds of people only one pain in the ass is phenomenal. Everyone was just super.

Because of the lousy weather have not done much today, went into town to get a few things and had lunch at this wonderful little restaurant Lux Cafe. I love breakfast food, so I had biscuits & gravy with 2 eggs and hash browns ($4.69) Super little server suggested I get the one on the senior menu. She said you’re kind of tiny and the regular one has 2 biscuits and 4 eggs plus the has browns. I figured what the heck if I’m still hungry I’ll get something else. Boy was she right 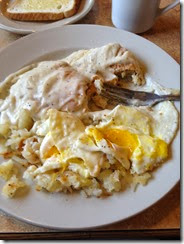 Sam got open faced roast beef with soup and mashed potatoes. He said it was great, couldnt finish it all so Riggs had a nice treat mixed in with his dinner. 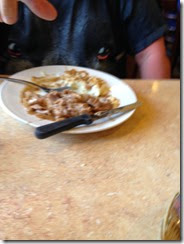 So if you are ever in this area, would highly recommend this restaurant.

Well guess I have rattled on (and on) long enough.

Posted by Sam&Donna Weibel at 7:40 PM