Sorry about no post on Monday, we had no internet service and by the time we got off work,went to the opening ceremonies and then a Wally World  run so Donna would have the makings as for a dessert for the Staff Pot Luck Dinner tonight.

Monday was also our last day of parking detail. This is not for the faint of heart as it entails starting your day at 07:00AM and working at a post until 02:00PM. We were fortunate in that the weather cooperated for three days and we didn’t  get rained on. It was a fun and we were stationed on the main road in and directed the Rv’s to whatever lot they were assigned. that means we saw everyone arriving from early birds to regular arrivals. 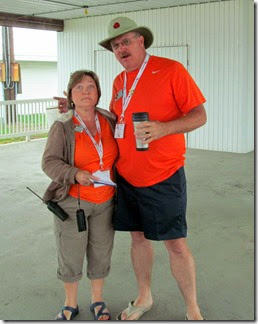 The Escapade Opening Ceremonies were held at 03:00PM. 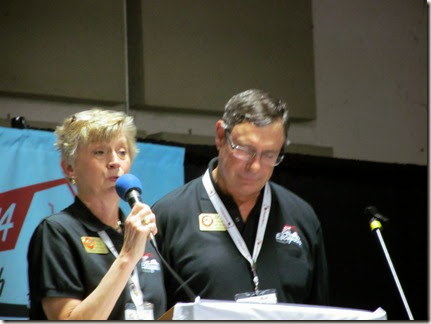 After the opening, they had an ice cream social outside and while we were enjoying our ice cream we met Rick & Kathy Rousseau from Tecumsah ON. We both follow each others blogs and this was the first time we have gotten together, They had said hi the other day while we were parking , but this was the first time we had time to chat. We promised to meet again before the Rally is over. 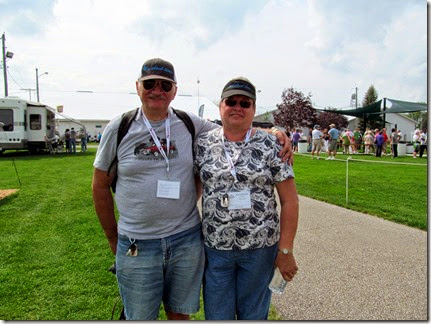 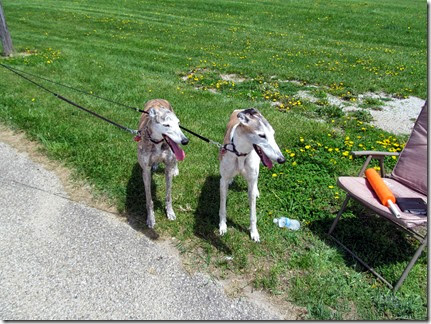 A couple of Rescue Greyhounds that came for a visit while we were parking cars.

Just for anyones information who is at the Rally we are in spot 242in the Staff parking area if you see us sitting out stop by.

Oh I think I have solved the wi-fi problem, the fairgrounds system is overwhelmed, and we are in a dead spot for the Wi-Fi Ranger system that the Escapade is using. So today Donna called and had out MI Fi turned on so we can make posts and get mail.

Donna is baking up a storm and the fiver smells like a bakery. That’s about it for now, everyone be safe out there. Sam & Donna….