When we put Riggs out this morning, the guy next to us was hooking up his toad in preparation of leaving. As he bent down to connect he said “Did you know you have a flat tire?” Well sure enough we did. Sam didn't want to try to change because of all the rain the ground is soft and its a lot to lift a rig to change a tire.  I called our insurance company as we have road side assistance on all of our vehicles so assumed we also had it on the Rv.  Well you know what they say about assuming. I called and after about 25 minutes on the phone found out we did not have it. The gal said she could still arrange someone to come out to change the tire but there would be a fee for them to do it. Being in unfamiliar area I agreed to the fee, she then put me on hold while she got customer service. She said fee would be $61.00. I had been talking to her from the bathroom as Riggs decided to bark at everyone who so much as whispered outside. I came out and told Sam about fee and asked if he thought we should just try on our own.  He said yes, so when lady came back on line told her we’ve decided against having  you do it for the fee, she told me she had found out from customer service the 61 was only good for cars that it would be $200.00 for her to make the call on an RV. Right, thanks but no thanks. How in the world can they justify a phone call being $200.00. I called the campground office, got the name of a tire place, called them, Monteith’s and within a half hour they were here, took tire off, repaired it (there was a screw in the tire) and had it back on. My hats off to them. Total $25 repair $65.00 service call. I called office back and let them know not to hesitate in recommending these people to any other rver that might need their services 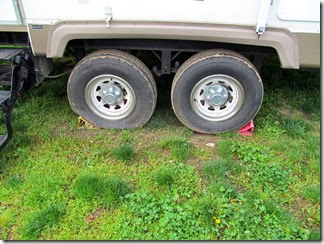 So little later we headed to Shipshewana 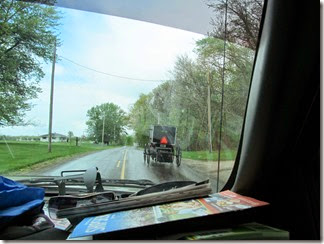 Amish buggies all the way. Did not know it but this area is the 2nd largest Amish community in the country.

Of course our 20 minute drive turned into 45 minutes as some of the streets we were to take were missing street signs so we missed them. Because of his feet problems Sam decided to stay in the truck while I explored. As I was getting out of the truck I noticed, I hadn't taken off my house slippers and put on my tennis shoes! Fortunately they are brown and almost look like a snow boot so guess no one noticed, but w/o any support they aren't the best walking shoe. I only went into a few shops as I am really not much of a shopper and there were a lot of boutiques with handmade quilts, antiques and furniture. Karen P they had a yarn shop you would have loved and Alice W lots of quilting supplies. Of course I found the candy shop! Dark chocolate cherry cordials for me and cashew patties and peanut butter chocolates (both sugar free) for Sam. My brother Pat is a huge fan of Jelly Belly. They even had Jelly Belly flavored sodas. 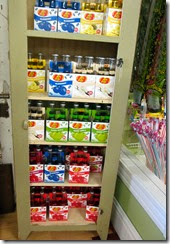 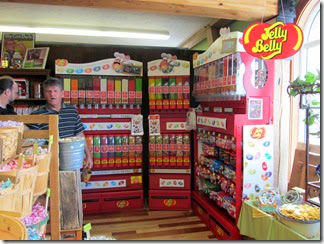 I also stopped at a shop that had among other things homemade jellies, jams and butters. Got a blackberry and a cherry butter. 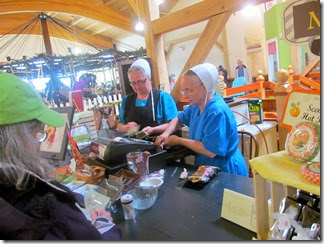 Cant wait to put those on some biscuits!

The market I was in was 4 stories tall and was really nice, they even have a huge carousel for the kids both young and old 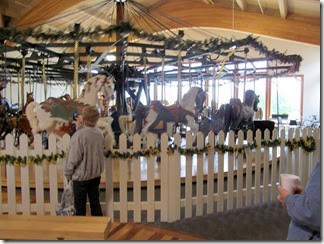 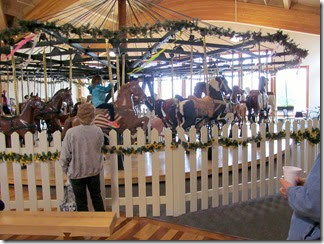 There was even buggy rides you could take, only $4 for 8 minutes, couldn't talk Sam into it. 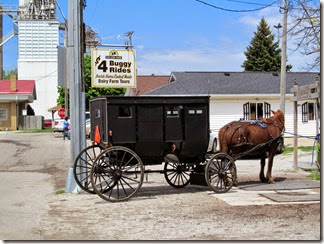 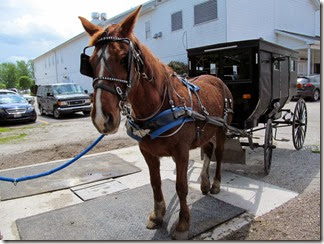 Last stop was at the Eissenhaus restaurant, bakery and conference center in Middlebury on the way back. Bakery was packed. I bought some cinnamon rolls for in the morning, but so much of their products were a little pricey, drooled over a cherry pie but couldn't talk myself into the $15.00 price tag.

So on to home we went. We stopped at Wally world for a couple things, with cherry pie still on the brain I got one there for $6. I’m sure it wont be as good as the Amish baked one but my budget will be happier.

We finally got some sun and only moderate wind and only a couple of sprinkles today,of course the sun didn't really stay steady until about 6 tonight.

We will be heading out in the morning steering toward my niece’s place in Auburn Ind.

Now its time for me to have a sangria spritzer and some Hagen Daas dark chocolate gelato.

Happy trails to all

Posted by Sam&Donna Weibel at 9:12 PM