Another Rigg’s Adventuring and other memories

I will start today’s blog with another Adventure of Riggen the wonder dog, first I have to lay the groundwork as there needs to be a little ground work so it can be better understood, First every fall Donna bakes Christmas cookies by the thousands to take to her work and mine,  This year (2009) was little different as we had to leave on a trip to my hometown in Scranton Pa. to visit with my younger brother Rick who was suffering from terminal colon cancer.(He passed away December 30th leaving a 17 year old daughter, Rick was 56 years old and a single father with his daughter at home with him.). Sam of course since he was very close to Rick wanted to see him alive versus at a funeral.

Rick and his daughter Barb on a visit to our house in Mo. 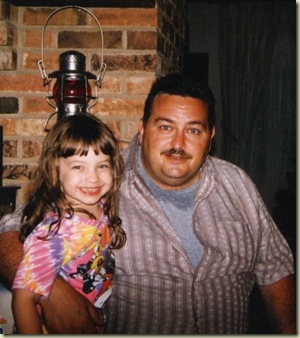 When we returned from this trip in early December we found out about Riggens latest adventure.

Here it is. As related by Mom.

This fall has been really hectic and then with going out of town, my annual Christmas cookie baking

marathon has not materialized.

Riggins was so thoughtful while we were gone. He knew people would be disappointed if I didn’t have holiday cookies

that he went into the pantry and got out 2 bags of chocolate chips, 2 bags brown sugar (1 light 1 dark just like I like to use)

I guess he got really bummed when he discovered without the flour eggs and oil he couldn’t make those cookies, so he

ate some ingredients, others he shook until they flew all over.

now isn’t he just the most considerate dog you've ever heard of ? cleaning up all the vomit and diarrhea wasn’t so bad knowing

his heart was in the right place

We have always been a dog family, we have been blessed with some really memorable animals, Sam when he was a police officer had two Shepherds, Sir Coal and Heidi, both were exceptional and great family dogs as well, Heidi was killed by a car trying to save a puppy who had strayed into the street, Duke was the puppy and he turned into a very large Yellow Lab and Husky mix. Donna still cries when she thinks about Duke, he lived 14 years thanks to Heidi’s sacrifice.

Now we have Led Zeppelin,(Zep) a Rott and shepherd mix inherited from one of my sons girlfriends, he is 8 years old, Riggs the Black Lab who we got after Duke passed, he is one year old.

One more thing, on my trip to Visit Rick, he asked if I had ever had a colonoscopy, I told him no, and he said Sam when you get back get one your 62 and my doctor told me if I had gotten one when I was 50 I wouldn’t be laying here today, well a week after we got home Donna had made the appointment and I got it, luckily I only had two very small benign polyps that were removed and the doctor said come back in 5 years for another one. He stressed men over 50 should have this and a PSA test done at regular intervals to stay ahead of the game and detect cancer at early and hopefully treatable stages.

Well that about it for today, Be safe out there, Sam&Donna

Posted by Sam&Donna Weibel at 6:16 AM