Got back home after a grueling 9 hour drive from Shawnee Ok. to Kingdom City MO. The trip down wasn’t bad because it was sunny and daylight most of the way but the going home from Wichita to Kansas City was nothing but sleet freezing rain and watching for ice on the road. I will say that I-35, which is also parts of the OK, and KS Turnpikes is excellently maintained and smooth but you can only go so fast for safety in those conditions, The young men played two day of baseball consisting of 4 games and cold (40’s) cloudy and misty conditions and split the wins and losses. College ball is really fast paced and these guys all play their hearts out, they are really outstanding examples of our good young people. We left the field in Shawnee at 4:30 PM and with a stop at the Golden Corral in Wichita for dinner we arrived back at 02:30am Sunday Morning. I got the beast back to the terminal at 03:30am and since it was a Sunday morning, no one else was around so since it is still right at or below freezing the lowly driver gets to dump the tanks, For all of you who love this chore with your RV’s I won’t go into the gory details, but imagine backing you rig over a 2foot by 2foot containment in the ground, lining up what is just a 4in outlet tube, same as on your rv except pointing down and then pulling the valve for the lower tank and then the valve for the upper tank, no hose is involved, the makers of motor coaches must feel hoses are for sissies,When you pull the valves it tanks some fancy footwork to retreat to the rear so you avoid any splashing. Don’t want to spoil the shine on those nice clean uniform shoes. The containment is made of concrete and reminds me of the toilet facilities found in some countries overseas. Of the hole in the floor variety. I  noticed quite a few Rv’s on the move while traveling in daylight most heading south so I guess there are some late starters from up north escaping still.

Before I forget Ray from Gleeson left me a comment on changing some settings so I could preview my comments before they are posted to make sure they are of an appropriate nature, Since I don’t have a clue how this is done I will take Ray up on his offer of help in this matter as it sounds like a good idea to me. Thanks again Ray, these are the kind of things that I need help on since I am an analog guy in a digital world.

I will post a picture of one of our coaches so if you see one in your travels and a fat guy is driving you can wave, it just might be me,I do try to give a quick glance at the rigs passing by so I can have an attack of jealousness. 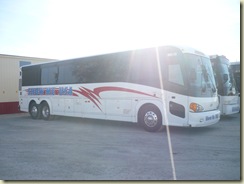 The company I work for is Huskey Trailways, but the bus pictured says Show Me USA, they bought this company so a lot of the coaches have not been relettered . The red, white and blue graphics are the same on both and we have a few Show Me coaches that are yellow with the same style graphics. Well enough for now I am still tired and going to take a nap. Be Safe out there. Sam & Donna.