Yep, got back from my latest bus adventure at 0600am I was supposed to be back at 2200pm Sat according to the work order, but the team played three games instead of one so we didn’t leave Conway AR. until 1930PM Sat which to go almost 400 miles takes you eight hours of driving time not including a rest stop every three hours so they can stretch their legs and use the facilities. So I dropped them off at the college in Fayette MO. at 04:30am Sun and then it was 45minutes to the terminal about 45minutes getting the bus ready to park and then a one hour commute home. Donna had the coffee ready and two plain cake donuts since I can’t have the good ones.

I may have said this but these college kids I have been taking are really great, this group was the ladies fast pitch softball team. Remember way back when President Nixon’s “Silent Majority”was his theme. Well these kids are like that, the face of America’s best, Just good kids, values, responsible, Polite, just really fun for an old guy like me to be around, don’t forget in my 30 years as a cop I saw many of the other side that were getting the headlines and the kids I have been meeting make you glad to see we still have a pretty good bunch of young people they just don’t get the headlines like the trash does. And for all my Canadian friends I know your colleges are producing just as many great young people, and really who do we have to thank for this but the Silent Majority of parents out there that took the time to instill these values.

Ready for another Riggen adventure , as usual after two days away when I hit the door my buddy was overcome with gladness to see his Dad, I got the full body wag and the licks and cries that go with it, it usually takes him 5 or 10 minutes to finally settle down. I  hate to see what he will be like in March when I have a six day trip scheduled.

Anyway there was a package waiting for me that arrived in the mail. It was a small box and inside packed and surrounded by Styrofoam was a rechargeable battery pack for my scanner from scanner world.

While I was downstairs in my office trying to compose something for this post Riggen stole the box off the kitchen table and proceeded to shred the Styrofoam all over the kitchen so it looked like it snowed in there , Boy was Mom happy. 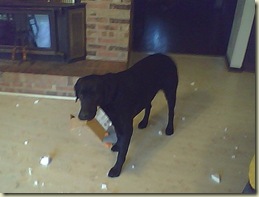 Here is with the box. 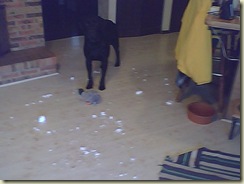 That's it for today, I have to catch up on reading the blogs I follow and then wishing I was sitting in the Pool like Rick, from Rick & Paulette's Blog. Or meeting other bloggers like the Bayfield Bunch have been doing. Until later, Be safe out there. Sam & Donna.

Posted by Sam&Donna Weibel at 8:53 AM