Was up early at 04:30AM and had coffee with my bride, then she was off to the truck company and then the restaurant.

We started our heat wave here at the Weeb Ranch today, the internet weather page said 106 degrees for the St Louis area. but here is what the kitchen thermometer said at 03:30PM. 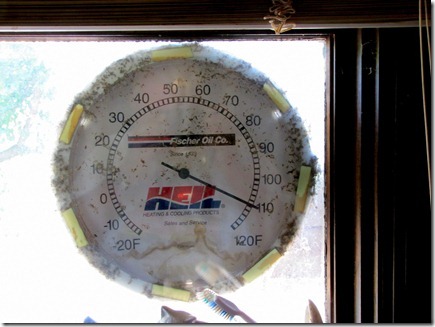 110 degrees in the shade of the back of the house.

Supposed to be like this until Monday when the high is supposed to drop to 98 degree’s.

Naturally none of us except Donna have left the house. The dogs run out and then run right back in, even they know its hotter than normal.

Got an e-mail from my old Navy Buddy Barry and his wife Bonnie that they are still staying with their daughter after being evacuated from their home near Colorado Sprigs, by the fires there. Barry tried to go see if the house was okay. and he said luckily the road in front of their subdivision has acted as a firebreak and kept any of the houses in his subdivision from burning, he said his neighbors across the road weren’t so lucky and a lot of homes burned in that subdivision. He said when he got back to where he was staying his van had to be aired out and left out in the open because it smelled so bad of smoke.Our prayers go out to them that their home and belongings will be safe, and we ask all of our blog friends to think of them in their prayers and all those that are suffering and homeless out in Colorado and Florida..

I hope he doesn’t mind I will reprint the e-mail here.

Thank you all for your concern and prayers for us. First of all, we are safe and feeling very blessed that we have a safe haven here at Barb’s house. We have air conditioning, privacy, showers, and food. More than some of the 32,000 others that have been evacuated. Our neighbors are here too with their cat and we say we love it here at “The Ritz”.

Hundreds of homes were lost, but our immediate neighborhood has been spared so far. The firefighters have stopped the fire from crossing the street that separates us from the homes that were destroyed.

The fire continues to burn, 18,000 acres and still only 5% contained. The Air Force Academy and the neighborhood just south of them is now at risk, as well as the town of Woodland Park which is a beautiful little town up in the mountains. The news keeps saying this is a fire of ‘epic proportions’,

It just gives us all a little idea of of what they and their neighbors are dealing with and how lucky the rest of us are to just be a little to hot.

Not much doing here at the ranch, both dogs are laying at my feet under the kitchen fan. Rigg’s has been a big water drinker all the time we have had him but today even Sadie is making repeated trips to the water dish. I have filled it twice already.

I was going to see if Adam wanted to go swimming out at the Lake but I couldn’t get a hold of him. He will probably call tomorrow as he said when he left the campground he wanted to this weekend here with us.

That’s about it for now. I hope everyone is fine and doing well out in Blogland, Be safe out there. Sam & Donna…….

Posted by Sam&Donna Weibel at 4:13 PM