Was up at 04:30AM with my bride for coffee, then Donna was off to the truck company.

About 09:00AM Nicole arrived home after spending the month of June at her Dad’s house. Rigg’s and Sadie were ecstatic, plans were made for an afternoon of swimming, since the Lake Pool is closed on Mondays I checked the City of O’Fallon and their public Pool is open, so we went there, that was a mistake first if is $4.50 a person instead of the $3.00 at the Lake, then is was wall to wall people, cheek to jowl as they would say. we all agreed that we won’t be going back and will wait for the Lake to be open.Anyway about 02:30PM a thunderstorm blew in and the pool was closed so that ended that. 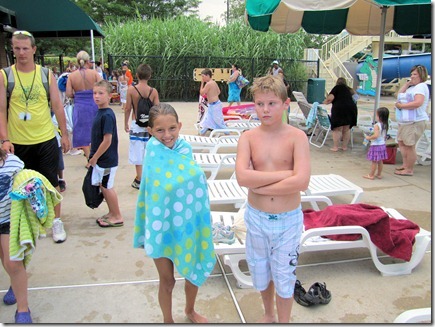 Nicole and Adam at the pool just before the storm hit.

Have to say it was a pretty good storm plenty of thunder and lightening and then hard rain, the first we have had in about three weeks, but then it was over and the temperature started back up.

Donna has to stop on the way home at the Ford dealer for a recall on her 2002 Escape.A ten year old car and they are still recalling things.This time it is a short in the antilock brake module that can cause a fire. I’d love to try to prove that one if it happened.

Hopefully if we take the fiver to the Lake after the 4th holiday is over, I will have both Grandkid’s, Nicole is looking forward to it she says, it will be her first time camping with us.

That’s about it for today, hope everyone out there in blogland is having a great week. Be safe out there. Sam & Donna…

Posted by Sam&Donna Weibel at 3:04 PM