Another Gorgeous Fall day with sunny sky’s and temps in the middle 60’s. To Bad Donna has the restaurant duty tonight.

A couple of weeks ago I put  program called Belarc in my laptop, This is a free program that gives you all kinds of information about the performance off your computer and what programs you use and don’t use.One of the things noticed was it had 4GB of memory, but it was all in one stick leaving and empty slot. My new laptop is an HP with windows8. Donna’s is a Dell with windows 7 and is about a year older than mine. I checked her setup and she has two memory sticks of 2GB each giving her the same 4GB but with no empty slot.

Right away I wondered what a stick of memory  would cost to upgrade my HP from 4 to 8GB. I went on the web and searched by price for a 4gb stick with the same specs as the one in my laptop. I found a supplier right here in St Louis called Arch Memory, that had  one priced at $39.99. They had a website and would take Paypal, That was Thursday of last week, last night when Donna got home she picked up our mail. So this morning sitting on top of my laptop was a small box from Arch Memory.

I opened it and there was my memory stick, they sent detailed instructions on how to install and and said if you have trouble to call or bring it in and they will get you going.

I unplugged it, took the battery out, grounded my hands to metal at the cook station and then snapped the stick into the empty slot. As soon as I powered it up I noticed the boot sequence was faster. I went to property's and sure enough it was showing 8gb on the memory total, so the operation was a success. I noticed there is a very noticeable increase in speed between websites, and when you download a train picture, it appears in a split second rather than slowly paging down the screen, I was impressed. The bummer is if I want to do Donna’s Dell, since they have two smaller (2gb) sticks, I would have to buy two 4gb sticks to get hers to 8BG. Which would double the price. She says she doesn’t really need it now, so  will wait and see for her’s.

How about a picture of my New Jersey Grands, Tim & Bonnie’s two girls. 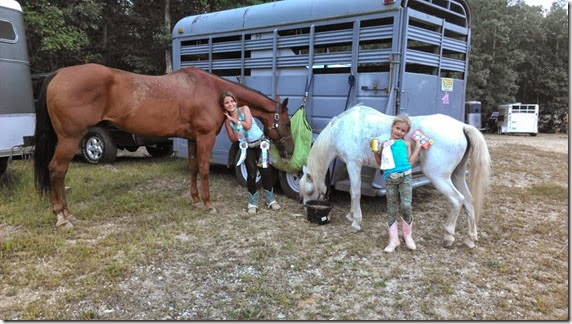 Meghen & Katie and their buddy’s

Hope all is well with all our friends out there, Please be safe. Sam & Donna….

Posted by Sam&Donna Weibel at 4:10 PM