It is a sad day in the household today, we lost our buddy Zep (Led Zepplin) last night, Zep was the older of our two dogs and came to us from one of Andy’s girlfriends as a pup in 1999, he was raised by Duke, the Yellow Lab Husky mix we had at the time, and after Duke passed away a year ago, He became the mentor of Rigg’s our younger dog when he came as a puppy. I think he was more of the kindly Grandfather figure than a dad. He would put up with all of Rigg’s puppy shenanigans but of course there were several rules, one was Zep ate first, and two was when he had enough he would growl and Rigg’s would assume the submissive position and then Zep was happy again. Rigg’s wants to tell you about it, he is really upset.

“My buddy Zep wasn't feeling good again, He's been awfully sick, that's why for a couple of weeks I wasn't getting into anything, I

He even let me eat first, in fact he didn't eat at all and he  looked awfully sad.

Then last night he got worse, I was so scared, he started coughing and trying to throw up but couldn't.  He let me lick his face

Then about 930 he laid down and he didn't wake up.  I tried kisses but he wouldn't move and I was so sad.  Zeps man Andy was sitting on the floor and crying so hard, I tried to lick away all the tears, but they just came too fast, so I just sat and looked over my buddy. I think of that song. I'm going to miss you my friend, I'm going to miss your smile, even knowing how it ended I'd do all over again.

So play it sweet in heaven because I know that's where you need to be. I'm going to miss you my friend.

Bye Zeppy (Led Zeppelin) Andy loved you so much, as did Mom, Dad, Adam and me. 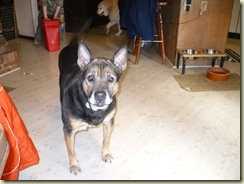 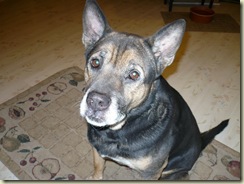 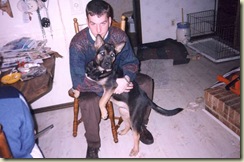 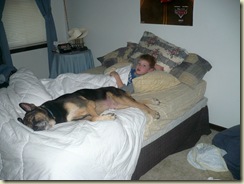 Yes good bye old buddy hope you are with your buddy Duke, boy the companionship and memories you have provided this whole family with, money can’t buy. We’ll miss you,Love Sam, Donna,Andy,Adam,&Riggs.

Posted by Sam&Donna Weibel at 7:50 AM