Was up early, Donna slept in until about 06:00am,it turned out to be a pretty good day with temps in the high 70’s and sunny most of the day, I went to Lowes and got oil, a filter, plugs, and an air cleaner filter for John Deere. I tried to get new blades but since I have a larger and odd size deck they have to be ordered, so I just waited till I got home and ordered the blades direct from Deere. It takes three blades and it is $50 for the set. I then gave John his tune up and filled him with gas and we went out and did a couple of hours of mowing, it still has a couple areas that will have to wait as they are under a couple inches of water.

After that I flushed all the water lines on the fiver, and filled the water heater and fresh water tank was flushed and filled with fresh water, the pump is working fine and all connections look tight, so now the only systems not checked are the fridge, I will turn it on later in the week and then get some drinks and frozen stuff for it.Then I will turn the propane on and check the furnace some morning early when it is in the 50’s. That should do it and it will be ready for the road.

Donna took some pictures on the way home from the truck company near Lambert Field, ( St Louis Airport) she had to drive and shoot so they are not the greatest. 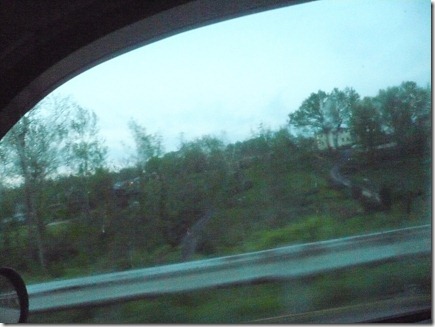 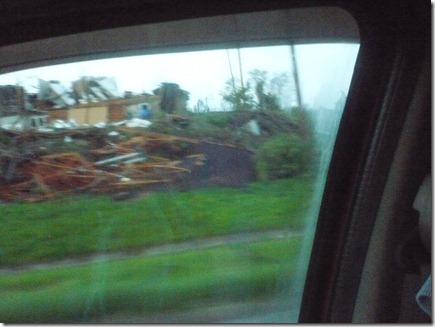 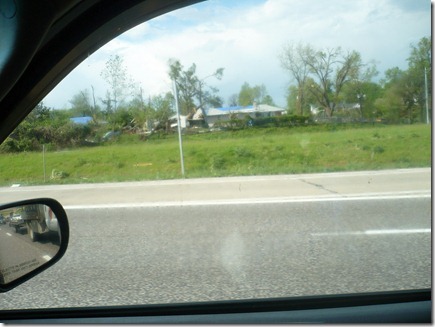 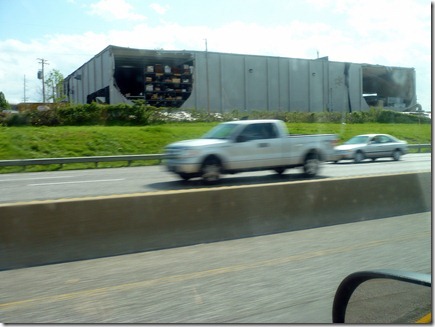 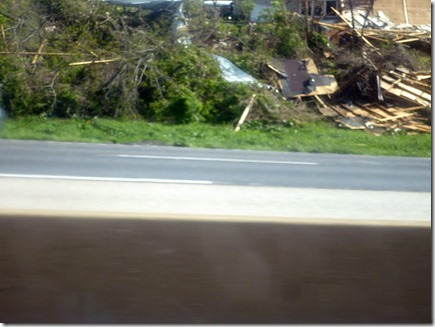 Pretty much shows the force of the tornado, again we were really lucky compared to our Southern neighbors as we had no deaths due to the storm.

A couple of people were worried about Rigg’s and Sadie after their blog entry yesterday and their mention of Stitches, these were the stitches related to their neutering and not from some accident. Sadie does like to give Rigg’s a nip on the ear when she is playing with him but he doesn’t seem to mind and it’s never broke the skin, Much like puppies do when they are nursing.

It’s about 04:00pm and the sun has disappeared and dark clouds have taken it’s place, hope we don’t get much more rain.

Donna just left for the restaurant. so now I am thinking of something quick and easy to make for supper for just me tonight, the kid’s are going out to eat.

That is a sign of the modern generation nobody cooks at home, they must eat out three nights a week, when I was growing up we didn’t eat out three times a year. I still prefer the taste of my own stuff over a lot of restaurant food.

Well that’s it from the Ranch for today, Hope everyone is having a great weekend. Be safe out there. Sam & Donna.

Posted by Sam&Donna Weibel at 4:06 PM