Had another nice weekend, stayed in the middle 80’s yesterday and today it is cloudy and in the 80’s.

Donna worked the restaurant last night and slept in so I had my 06:00AM coffee with Rigg’s and Sadie.

For the last several weeks since Donna found her bicycle I have promised her I would look for one for me so I could join her in rides and get more exercise.

I watched Craigslist, but the single speed / coaster brake cruiser style bikes were between 75 and 150 dollars, these are used bikes, found one for 50 but the guy never answered his phone or e-mails.

I was about ready to give up but the other day when I was in Wal-Mart shopping I saw a 26 inch Huffy Cranbrook Men's coaster brake bike with a nice fat seat, marked down to 89 dollars. I came home and this morning I hit craigslist again and all the bikes were higher than that. I told Donna I think I am going to go and buy the one at Wal-Mart, at least it will have a new brake and bearings. When I got there it had been marked down again to 85 dollars and there were four left one girls, a white men's, and two brown men's. I didn’t like the white with black fenders, so I bought one of the brown and black ones. 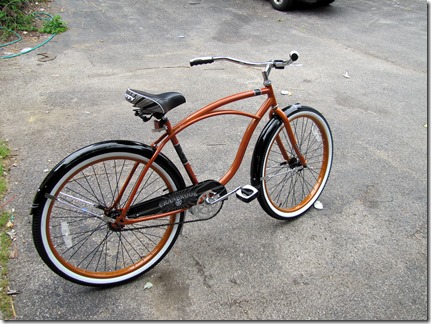 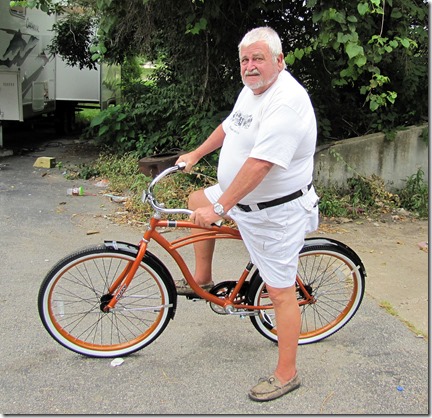 Even came with white sidewalls.

That’s the big new for today, my bride and I can tear up the sidewalks in the subdivisions around us and maybe feel better at the same time.

Donna is off today so we are having Fettuccine Alfredo Polo tonight for our dinner, one of my favorites.

Not much else going on the two mutts are laying around and having a rest period. Rigg’s is at his post under the kitchen fan next to his Dad, and Sadie is laying in her little bed behind my chair. No one is going to sneak up on the back door without the dynamic duo alerting us.

How about a Navy picture from the USS Independence in 1969. F-4 Phantom II got the burners lit on those J-79’s off the waist cat.

That’s it for today, everyone be safe out there. Sam & Donna…..

Posted by Sam&Donna Weibel at 3:04 PM