Donna and I were up early and had our coffee, she did a little work around the house but mostly relaxed, We both took advantage of the holiday yesterday and had an almost do nothing day. although my 4th of July started at 08:30AM with John (Deere) and I making a round of the grass so just in case anyone drove by it would have a fresh cut and holiday look to it. It only took about two hours. and that was it for me, I just sat around and enjoyed the day as a day of relaxation.

Today was pretty much more of the same I folded some laundry this morning and that was it for me. Donna got ready and about 03:30PM she headed over to the restaurant. They were closed for the holiday yesterday so she was home last night. Rigg’s is pacing and trying to be good, my Son is getting the fire ready to Q for supper ,so the smells are getting to Sadie & Rigg’s and the have their noses glued to the back door.

My son Sam’s Condo in NYC has a great view of the Hudson River where they shoot off the cities fireworks display from barges. My other Son Rick was there to watch them with his brother. Here’s a couple of flicks. 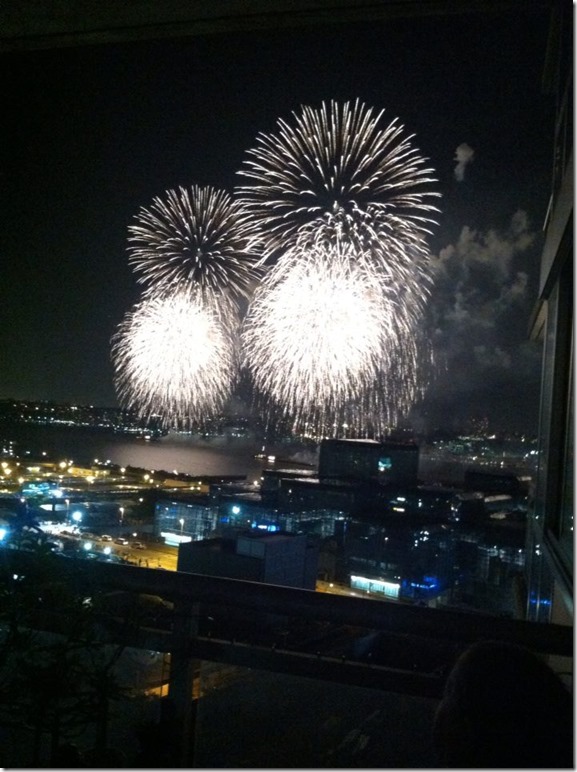 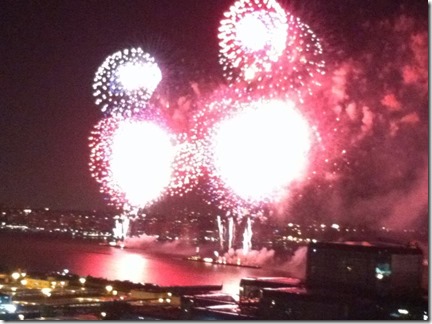 Looks like they had ringside seats. A half a block from the building in the lower right corner the USS Intrepid is moored, I spent a short 1 month Det. on her when she was in Pensacola as the training carrier. Maybe someday I’ll get up there to walk her decks once more.My Bucket list keeps growing.

Dardenne Prairies 4th celebration was low keyed, just some fireworks behind the City Hall and that was it. Of course the kid’s in the subdivision kept the noise going until well after midnight. I think St Charles County allows them, since there was no enforcement of any ordinances banning them.I know when I worked over in St Louis County, they were banned in the whole county. no stands no nothing. Here they put big tents up at the beginning of June and sell fireworks until August.

That’s about it for today. Hope everyone is having a great week and maybe some of you had a log weekend like I did. Be safe out there. Sam & Donna………

Posted by Sam&Donna Weibel at 4:11 PM