Saturday was another great day, weather wise it was sunny and hot, Donna and I just puttered around the house and built one of those shelf unit kits for the kitchen to get rid of two of those TV tray shelf's. It turned out great but the directions as usual were poor. 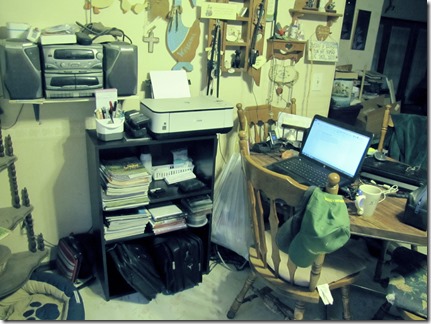 Donna got  short nap in the afternoon while I finished the white clothes, She was then off to the restaurant for the evening shift.
Our friend Al up in Bayfield On. mentioned in his blog today that Kelly & Donna were peas in a pod when it came to their work attitudes, two very attractive pods if I may add that. Donna has always been a workaholic holding down two jobs just about all of our working lives, I hope she can cope with retired living. we were planning on a trip to Pa. in August for a few weeks, but she says she just isn’t feeling up to it. I suggested maybe a week with the Grands someplace where they could have a small vacation and she could just lounge around. It doesn’t take much to make Adam & Nicky happy, just water and a campground.
Woke up Sunday at 04:00AM and found  Adam was here for a visit. Also found out Donna was assigned to the day watch at the restaurant, Adam’s Dad is working also, so it looks like Grandpa has step up to the plate again, I think there might be some ker splashes in our days plans.
Did I tell you I have been thinking about surprising Donna with a new TV chair. Only thing I would have have to install a plastic skylight above it in case she decided to get serious about using it. 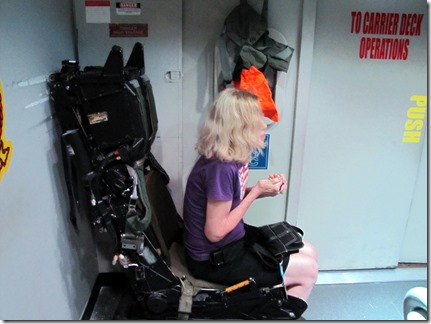 What do think, it’s made by Martin-Baker and is a zero-zero rocket powered model.
That’s about it for now. Hope everyone is having a good weekend. Be safe out there. Sam & Donna……..
Here’s a late rant. my Son just came in and said something is wrong with the A/C the house is 82 and the thermostat is set for 76. went outside and the outside unit ,which is only 2 years old wasn’t running. put new batteries in the thermostat, still nothing, went downstairs and a 60 amp double breaker was popped and frozen in the middle and wouldn’t reset. pulled the breaker and sent my son to try and find one on a Sunday, Maybe Lowes or Home Depot stock something.I can only hope that it’s a bad breaker and nothing else. after all they are 20 or more years old. Andy has been gone an hour so that’s not a good sign. that he is finding one. Luckily we have lights, outlets, fridges, power to the pumps, so if we have to we can run fans after the sun goes down, but it is 95 outside now so I am hoping for a fix today. Let you know later……
Posted by Sam&Donna Weibel at 1:40 PM