You know how I said my camera was eating my photos, well Sam said it wasn't the camera just the user and they weren’t good enough to save, WHAT me!!! ace photographer that I am. He did manage to save a couple. Now what’s wrong with these, personally think they are good pictures of Riggs’ water bowl, the trash bag, and the  box of kleenex 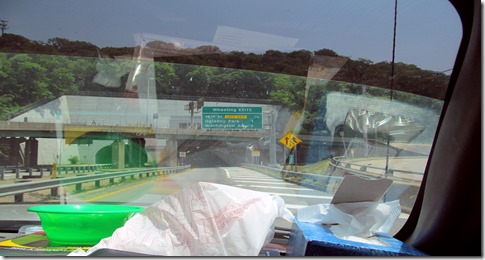 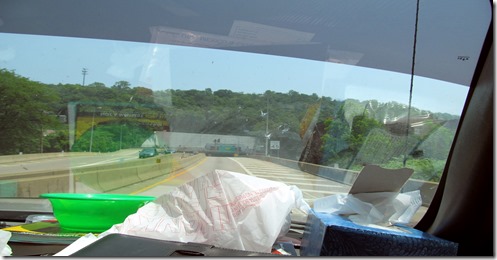 Yesterday we chatted for a while with a nice couple at the campground, then packed up and headed to nice campground in Newville,Pa. Sam put the destination in garmin, I had written down exact directions and off we went. Nice drive chit chatting and watching scenery.  I don’t trust the garmin so I pay no attention to what she says and she wants you on every back road.  We past a school with letters very big that said Newville Elementary I even commented on it and wondered why the school was so far from Newville, oh well must be a popular name in this part of Pennsylvania. So we continued to cruise right along. After awhile Sam asked what exit, told him 201. I checked milepost and we were at 218. He then said then why are we coming up on 226 exit. Then I saw next milepost…what 227???  Now you have to understand, Pennsylvania has the worst mileposts. They are very short and round and not very visible. So I called campground, sure enough we were by that time 30 miles in the wrong direction. I said we had to turn around, Sam said no way he was driving 30 miles backward and then next day drive it again.  So I called campground back to cancel our reservation. First time I talked to husband, second time the wife,told her I was sorry that we had to cancel, she said her husband had told her if it had been him he wouldn’t have turned around and she said she would have…guess its a male vs female thing.  They were so nice, while on phone she looked up 3 campgrounds with phone numbers on her computer for me that were close two were off I15 so Sam got off there and pulled over over we got to the toll booths so we could figure out which way to go.  I called, one number disconnected other didn’t answer, bingo on third one, Harrisburg East Campground. But it wasn’t off this exit, it was 11 miles further up toll road. As we went through toll booth Sam asked how we could get back to the toll road. Guy told us to go 15 north and take first exit, go left and it would have ramp back to the toll booths. Of course Riggs loves to put on his big boy pants and bark at toll people. Sam told the guy, he’s friendly you could stick your hand in the window and he would lick it, guy told Sam, I love dogs but not that much. Off we go to make our way back to where we were.  I had written down exact directions and off we went.  Man said to get off at I283 exit, from toll booth go strait. Sam headed to right, “Sam this isn’t the right way, we are suppose to be on 283”  “This is 283 you’ll see” . So up the ramp we went, and sure enough sign says 283, so as usual he was right and I was wrong, but still didn’t feel right.  Next we were to take first exit off of 283 and go left. We drove and drove came to a light at a T intersection and sign said 283 ends. We went left but wasn’t street  I had name of  it said I230 and was a small town business district. He pulls into Tony’s Pizza lot.  I called campground, sure enough we were lost again, should have stayed strait from the toll booth. He gave me directions so we didn't have to back track all the way back to toll booths. Sam asked right or left off pizza lot, “well is north to the right?” with his hearing deficit all he heard was right so that’s the way he turned.  On we go…uh where the light we were suppose to come to? Sam we are headed south!  Well you told me right…no I said is north to the right.  Well we made a u-turn and as you all know not that easy with a rig.  Off we go again. Still can’t find where we are suppose to turn. I’m not calling them again. We stopped at a small auto parts store and guy said you must be trying to find campground, guess the 30 ft fiver that was taking up his whole lot gave him the hint.  Just go down here to Eisenhower turn right and it goes strait to the campground, just four or five minutes away. GREAT! As by this time Sam’s patience has totally flown out the window. So we creep along looking for Eisenhower Blvd…10 minutes later no Eisenhower. I think I see another U-turn in our future. Sure enough headed back to town, now Sam is ready to explode.  Sam there’s Eisenhower!!! The damn street only has a sign facing south side nothing on north, sure enough just a couple minutes down the road the campground.

So here we are at the Harrisburg East campground. It’s okay but wouldn't recommend it. Close to the turnpike and traffic noise is horrible, these truckers love their jake brakes. And it is pricey and doesn’t offer much for the buck. Tomorrow we are headed to Hershey to meet with Phyllis and Len at Thousand Trails campground, which is about 15 or 20 miles from here, hopefully won’t be a 4 hour trip, but we’ll see.

Here’s a couple pics from the highway 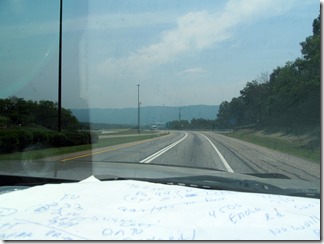 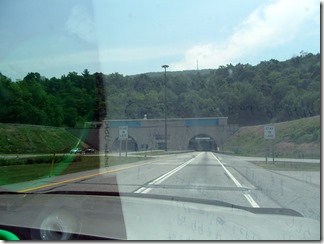 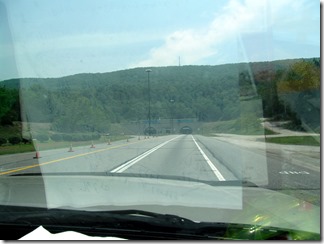 Oh by the way….Sam said I am a terrible navigator, I say we both screwed up, pilot has to take some responsibility. :-)

Posted by Sam&Donna Weibel at 5:34 AM