Hey everyone its Donna tonite.

We left Union Il headed toward Delaware (Columbus) Oh for my great nephews graduation party on Sunday.  We decided to break trip up into 2 days as it is a long haul. Checked 3 different map programs, came up with 3 different routes to take as we decided we would stop at Terre Haute or Indianapolis. The one that Sam thought was the best as we got further south was going to put us almost back in St. Louis.. So we altered to come into Indiana from the north bypassing Terre Haute area.  Between the construction in and around Chicago and the traffic our 4 hour trip turned into 7 hours.

Turned out to be one of those days, nothing major just a lot of little irritations that make for a long day. Sam doesn’t let fuel get close to empty, so when it was time to stop for fuel, we wait our turn, get up to diesel pump and because it was the bigger trucker nozzles all he could get was 6 gallons which meant another stop.  The other day batteries died in my camera and since he uses rechargables he does the battery changing.  During drive I saw a couple things to photograph, camera wouldn’t work. Turned out no batteries. And a few more miscellaneous blips.

Finally get to campground, Sugar Creek Campground in Crawfordsville,In. Sam makes the discovery our batteries are almost dead. Our converter has been acting up and he was afraid that it had finally quit. Since we were only staying the night he didn’t unhook. He plugged into the electricity at the site but was afraid to open slide incase we couldnt close it in the morning. As you know doesn’t leave you much room inside.  Didn’t really bother us but sent Riggins into a tailspin. He’s a big guy. When he jumped in the chair that is usually in the corner was in front of the door, so he immediately jumped onto it. Well you see Riggins doesn’t like jumping down, guess his perspective of heights is way off, as he would not jump from side of chair to the floor! It’s what 1 1/2 feet down? So there he sat, whining crying and panting his head off. I tried pulling him down but he wanted no part of that just dug in. He kept looking at his water dish and food bowl and would whine some more. 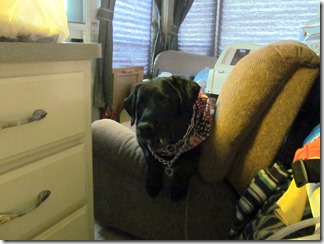 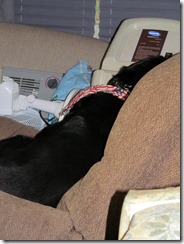 As you can see it was a long way to floor! After about 4 hours he finally put on his big boy pants and took the death defying leap to the floor. In meantime he took a little snooze against my oxygen machine. When he did jump (actually slid) down he somehow ripped the hose off of the machine. Of course all of a sudden I had no oxygen and was afraid machine was broken. Very relieved when I saw the dangling hose. Again not much room in here without slide but guess he was so tired from all the whining and crying he couldnt bear to stand to eat 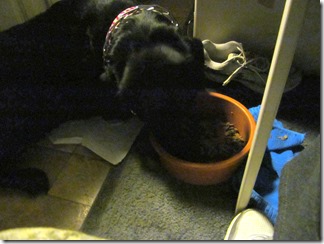 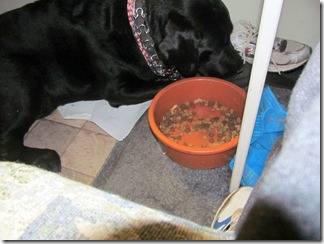 Then he decided to get more room so went up on landing by bathroom. Well he can go up steps but doesnt like to come down, so here he is stuck on landing whining and crying because now he wants to go pee. 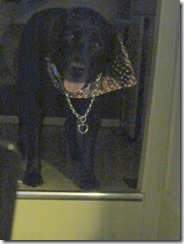 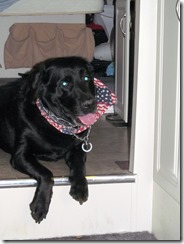 Fortunately for him he has a sixteen hour bladder because he was still there this morning when I got up.

We did figure out that problem was probably not converter. Some how when we switched off the a/c it clicked up to heat and believe that is what drained the batteries while we were driving.

Would definitely like to go back to Sugar Creek sometime when we can stay a couple of days.  There is a real Sugar Creek and the campground sits on it. Even spots backing right up to it. Riggins can swim in it, you can swim, fish and they do rent canoes and tackle. 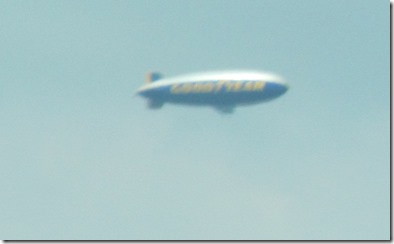 We are now at Cross Creek Campground in Delaware,Ohio. Really a nice place. Lots of activities especially for kids. 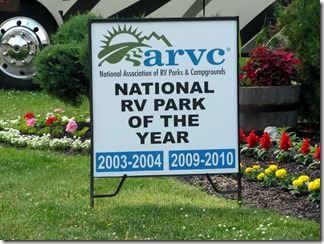 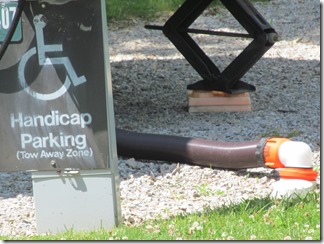 Well its been a long day, hope some of you are still awake. I have a tendency to ramble a little more than Sam. Will get more pics here later and post

Posted by Sam&Donna Weibel at 7:21 PM