Was up at about 06:00AM and had coffee with my bride, at 07:30AM I left to go pick up Adam in Warrenton, he wanted to stop and pick up breakfast at McDonalds on the way back. When we got back we had breakfast and then Grandma started on a cake for one of the girls who works with her at the restaurant. they are having a baby shower for her, so she made her a babycake. 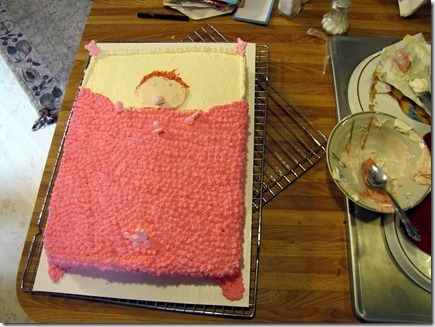 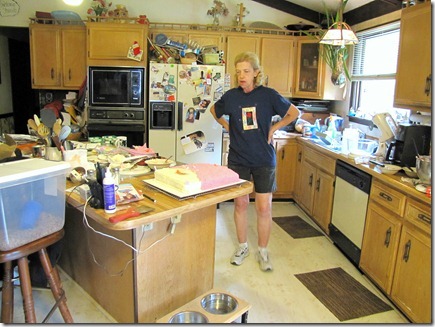 Donna the Baker finishing the cake.

Adam always the helpful one, graciously volunteered to clean the icing off the spatula’s and mixer blades for his Grandma and said he wouldn’t even charge her to do it. 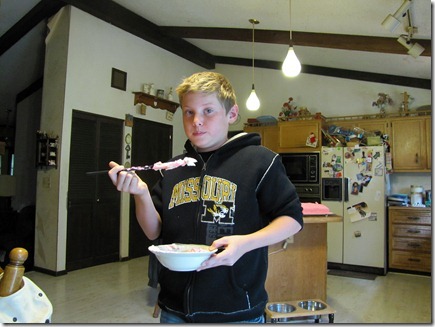 Adam cleaning the spatula’s off.

Later in the morning the John Deere dealer called and said the deck was fixed. Rigg’s volunteered to ride over there in the truck with Dad to be a guard dog while I was inside getting the deck.

They had inspected it and found two of the spindles that hold the blades on, wore out and so they replaced those along with the idler pulley and spindle for it. The parts came to $108.67 and the labor was $121.50 for a total of $242.98 with the tax included. For that I have just about all the rotating parts on the deck except one pulley spindle replaced so it is just about a completely rebuilt deck. The repair guy said it should be good for another 450 hours as long as I don’t try to cut a fire plug with it. I am happy as a expected that was going to be about what the cost was. To replace the deck is over $1000 so I am happy. 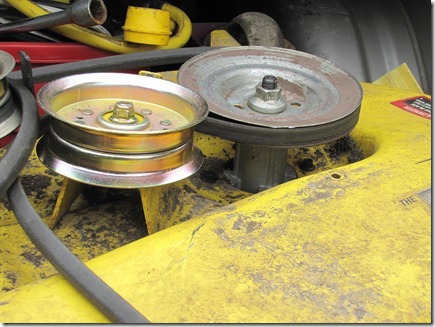 New Idler and one of the new spindles under the silver pulley. 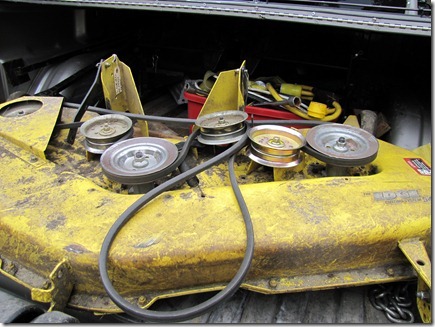 Ready to go under the tractor.

It was to cold to work on putting it back under the tractor today but I will do it on Tuesday when it will be sunny and in the 70’s again.

Got it unloaded from the truck and then loaded my generator back up in the back of the truck and now I am back to square one again.

Rigg’s enjoyed his ride, and now Adam is playing on the computer, his friend’s aren’t out because of the cold temps today. Donna is taking a nap before working the restaurant tonight.

That’s about it from The Weeb Ranch on the outskirts of bustling Dardenne Prairie MO. Hope all is well in Blog Land and everyone is having a great week. Be safe out there. Sam & Donna……

Posted by Sam&Donna Weibel at 2:26 PM