Was up at 04:30AM for coffee with my bride, then she was off to the truck company and Rigg’s and I had a short nap.

I have to find a way to get the deck up into the back of my truck, it weighs about 200 lbs. and my Son is at work on a couple of roofs he is helping put on like he did ours last year. 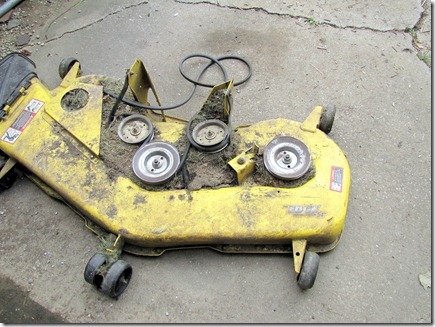 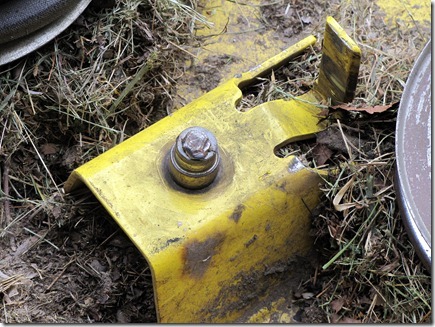 I used to own an oxygen-acetylene tank set that would get  that broken stud  hot enough to drive out, but about 15 years ago some guy blew up his house through carelessness with a set of tanks and now they are not allowed in residential houses, you can only rent them now and not purchase the tanks and hoses and torches.

So I will have to take the deck to the John Deere dealer to have the stud replaced and a new pulley put on.  I know that will cost a pretty penny because anything from John Deere is a high buck item.

Not much going on besides that it was dumpster day so I took the dumper down this morning. but that was about it for chores, like I said I still would like to go over the grass a couple more times before throwing some seed out and leaving it for winter, I have to seed and straw where the burn pile used to be and then leave it for the winter.

Can’t believe its October already, we are still having mild days in the 70’s but the nights are dipping into the 40’s and 50’s and it won’t be long maybe just a couple weeks before it starts to go below freezing at night. Usually right around Halloween you start with hard freezes at night.

I know most of the snowbird crowd is starting to head south already. Boy I wish Donna and I were heading out with them. Maybe next year.

That’s about it from the Ranch for today. Hope all is well in Blog land. Be safe out there. Sam & Donna……

Posted by Sam&Donna Weibel at 4:52 PM