Was up at 04:30AM and had coffee with my bride, then she was off to the truck company and then the restaurant.

It’s been cool each day this week when we get up earlier it was in the 30’s today it was 44, It got up to about 62 this afternoon, but it is supposed to maybe hit 80 Sat. and Sun.Pretty much sunny just a pleasant afternoon here at the ranch. Rigg’s and Sadie have been in and out between naps and they lay right beside the kitchen table in the sun that comes in the back door, I have the screen door open to let some fresh air in the house. Won’t be long and we’ll set condition Zebra and dog down all the hatches to keep out the winter winds.

Saturday will be winterizing day so I am picking up a couple of gallons of pink stuff and also winter oil for John Deere and a set of fresh plugs and a new air cleaner. He likes to change that stuff before his two seasons, Summer and winter.Although last year was so mild we only had him out plowing twice, The year before it was two or three times a week for a couple months. Were praying for another mild winter this year. but who knows, we could get clobbered. Someday insulated long johns and insulated coveralls will be a memory for me, but it looks like they will be back in action one more winter.Along with ski socks and my flight boots.

Found a couple of pictures that reminded me of our Rigg’s,  Karen in the Woods had this one. 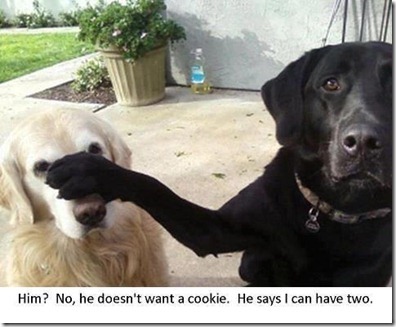 And here is another I found someplace in facebook. 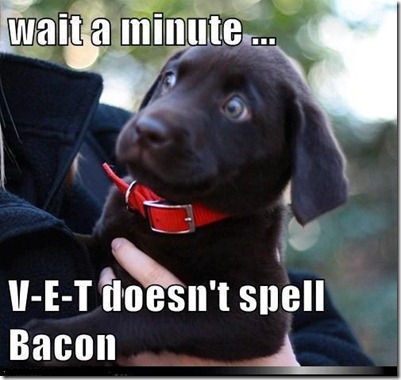 Boy don’t you just love Labs, a day doesn’t go by that Rigg’s doesn’t do something or make a face that cracks me up. And Sadie is getting just like him, they are both always one step away from trouble.

Today Sadie came over and jumped up to get on my lap for attention, Rigg’s just walked over and watched for a minute and then picked her up by his mouth on the scruff of her neck and carried her feet dangling and gently put het in her bed next to my chair, then he came back to his rightful place for his attention. What a jealous one. But he was still gentle with his little sister, He amazes me with the way he treats her.

Don’t have anything else going on in Dardenne Prairie today, so I will say See Ya Later, Hope all is well in blogland, Be safe out there. Sam & Donna…

Posted by Sam&Donna Weibel at 3:42 PM