Was up at 06:00AM for my morning coffee, didn’t sleep well most of last night,Then when the sun came up this is what greeted me. 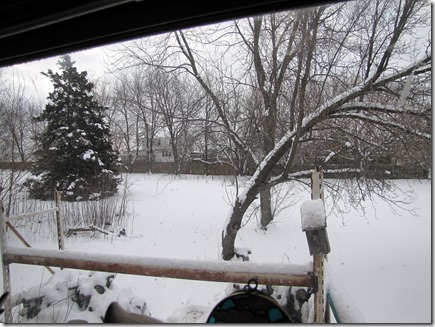 Yep about 6 inches of snow. 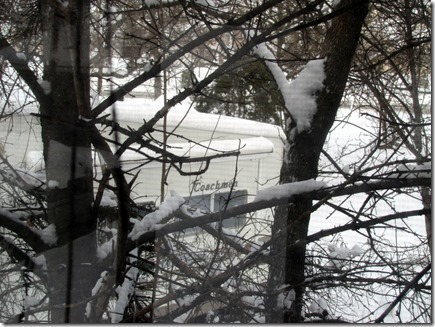 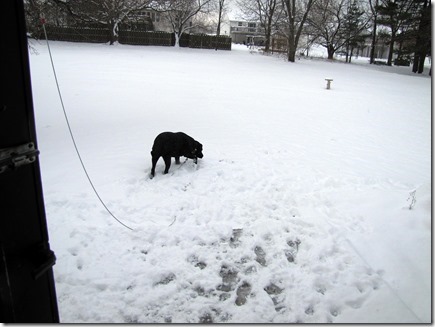 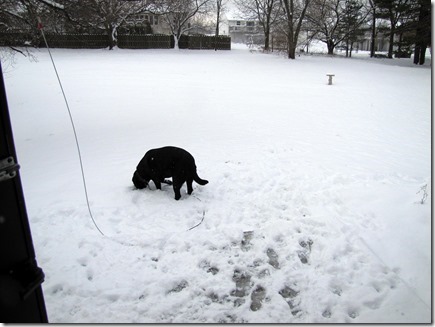 Rigg’s on the other hand is loving it.
Actually the sun didn’t make it out until about 01:00PM, it stayed cloudy most of the morning and continued to spit snow flakes every once in a while.
Having had such a nice winter so far this is the first snow of any proportion. Also having put off the task so many times, the plow is not on John Deere and the deck is still under him. So he got a break from plowing. I looked at the forecast and it is supposed to be 38 degrees this afternoon, and into the high 40’s the next two day so the snow should melt pretty quick. The roads are even starting to show bare already.
Not much doing around the Ranch, Samantha is making some side dish’s to take to a super bowl party her & Andy are going to, Adam is being picked up by his Mom so they can go to a super bowl party. Donna & I are just hanging out and not going to do much here at all. She said she is really feeling better today and doesn’t look as worn out as she has, I had suspected something was wrong for the last couple weeks just by the way she looked.
Well now just a few more days to wait and see how she is going to do. I for one will be glad when this is over.
Hope everyone is having a great weekend ever with snow, I wish I could find away to keep those Alberta Clippers from flying over and dumping snow on the Ranch. I guess if you have to blame some one. The Canadians are handy and all the ones I met have a good sense of humor. Eh.
Be safe out there. Sam & Donna………
Posted by Sam&Donna Weibel at 1:32 PM