Up at 04:30AM and it was still dry outside, had coffee with my bride, Then she was off to the truck company. Rigg’s and I took a nap.

About 10:30AM I noticed it was white outside and when I looked there was already a couple inches of snow and still snowing. They have been really hyping this storm as a potentially dangerous combination of snow and ice in the St Louis News and weather.

Around 11:15AM I got an e-mail from Donna saying they were sending them home from the truck company. I watched the news some more and found out a lot of business’s and all schools and government offices closed today also.

Maybe they know something we don’t , it looks like it is slowing down out there, but it is supposed to go on and off all day and all night, so we will see what morning brings.The good news is in two day the temps will be in the 50’s and the snow will be gone. 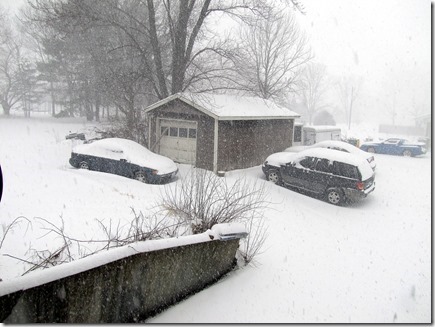 During the early part of the storm.

Here is a picture of Adam and his new little sister Kya. 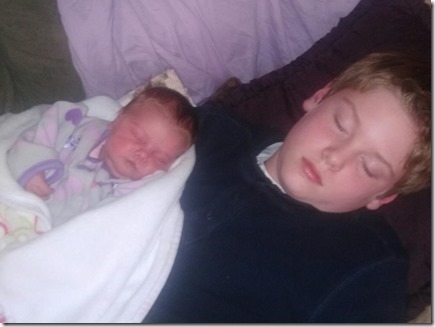 He is so happy he is a big brother now So far he said he would be his sister’s protector forever.

Sorry about missing yesterdays blog, don’t really know what happened, I thought I had posted and then about 9PM I was watching TV and thought hey I didn’t post today, had to give it an Oh Well to late now.

Everyone be safe out there be safe and hope your weathers better than ours, we will be inside and warm though with plenty of food and enough High Life to last until the weathers better.  Sam & Donna…….