Up early, Adam slept in until about 09:30AM, made a quick run to McDonalds to port the last two blogs and check my mail. Then we came back and got ready for another day in the water. While we were just fussing around the trailer Adam saw the  battery powered plastic Wave runner so we inflated it, and he discovered,  and decided he had out grown it. I bought it for him when he was about 5 years old and this is the first summer he hasn’t bothered with it at all. In what I thought was a really nice gesture, he said Grandpa let’s give it to the two little kid’s next store, (His friend at the next campsite had a brother and sister about 4 and 5 years old).I said if that’s what you want to do It’s okay with me, and he said sure they can have a lot of fun with it at the beach like I did. So he asked the parents next door and they said sure, Boy the two little ones were thrilled. Donna & I have always encouraged him to put the toys he no longer plays with in a bag and then we recycle them at Goodwill for some other kids to get some use out of them. It’s nice to see he is doing the same thing now without our encouragement. 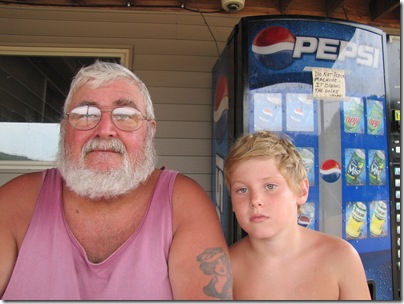 The afternoon was spent at the pool it was  a great day  with the biggest crowd kid’s, and all of Adam’s friends showed up and they played nonstop from Noon to 05:00PM.It was a little warmer at about 95 but the water felt good, the rain the day cooled it down a little so it was nice to get in instead of warm water. All told a good last day at the pool, we are spending the night and then packing up and going home in the morning, Adam’s Mom will pick him up after work tomorrow so he will spend the day at Grandpa’s. Rigg’s and Sadie will be happy to have us home.

Posted by Sam&Donna Weibel at 9:42 AM