Was up early and had my coffee, It’s another gorgeous day it was 79 degrees at 08:00AM. Yesterday I watched a movie in the morning and then went down to the Beach/Pool and spent the afternoon in the water. The high was in the middle 90’s and today it is supposed to hit 94, The plan is to spend my last day in the water all afternoon . I plan on hitching up tomorrow morning about 09:00AM and that will get me home early. Boy the week just flew by and that was without the kid’s being here.

Now we will have a couple weeks and it will be time to head for Sedalia MO. for the Escapee’s Rally. We are both looking forward to meeting new friends and some of the old ones we have already met who will be at the Rally.

The campground has about 7 or 8 sites occupied mostly tent campers with plenty of kid’s running around and enjoying the playground. This weekend and next weekend being the holiday weekend will be the last Harrah for the summer camping season, Next weekend the campground here will be full. Summer seemed to go by quicker this year for some reason, maybe getting older, although I had the kid’s out here at the Lake 1 week in May, two weeks in June, two weeks in July, 1 week in August, and then this last week with just Rigg’s and  so we had a pretty good camping season this summer. 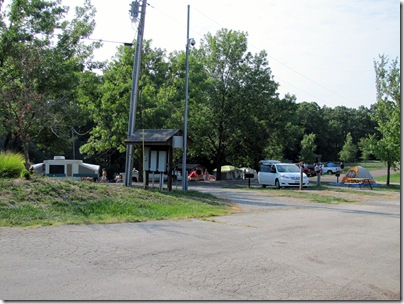 That’s about it for now, have to make a run to my secret wi-f- spot, and then out to the store since I ran out of coffee for the morning tomorrow. Hope everyone is having a fine weekend. Be safe out there. Sam & Donna…..