Sunday just flew by ,Adam had a scrimmage game of football in the morning and practice in the afternoon, where they all learned what they were doing wrong, and hopefully will improve next time, the coaches have to have a lot of patience with this age group, what a bunch of hard heads, they all think they know everything and actually they no very little about the manly art of football. however it looks like they will toughen up as time goes on. 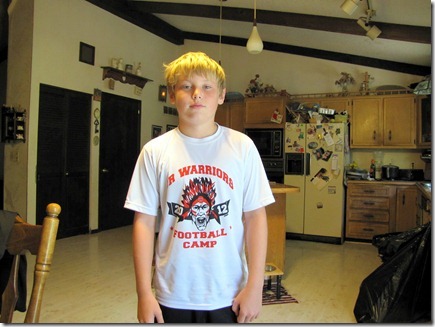 Adam in one of his practice tees.

I remember when his Dad was that age and starting soccer, which in the catholic leagues was every bit as rough and tumble as football with little protection. He was the same way, but he did make it to high school varsity soccer before a broken pelvis in a game sidelined him.

Today I have both of the Grands here, Adam asked to stay another night and Nick came over to finish moving her stuff and clean her old room. Both of them helped Grandpa carry the groceries in from the truck, and then they had a pizza for lunch.

Wednesday the tree people are supposed to finish the back yard job and the minute they are done I will head for the Lake weather permitting. Rigg’s is not letting me out o his sight, I think he knows it’s his turn to go camping this time. It should be good sleeping with temps in the 60-70s at night, won’t need the A/C after the sun goes down and the water will still be warm to swim in,

I just called Rigg’s Vet Ellie and she said it would be fine to allow Rigg’s to go swimming now. I will surprise him when we are at the Lake later this week.

That’s about it for today from the ranch, it is cloudy and a comfortable 78 degrees right now.

Posted by Sam&Donna Weibel at 2:06 PM