After a really dreary, rainy Sunday we woke up early and Donna got off to work, it is turning out to be a nice sunny day, with the temps predicted to be into the 90's again so the air conditioner will be back on. We had shut it off for a few days when the highs were in the low 80's and high 70's. Donna wants to thank everyone for the compliments on her cakes, she is self taught on decorating, reading how to, books to learn. But believe me they taste as great as they look. To bad I started that darn type 2 because we used to have a new great dessert every weekend, and now she bakes mostly for friends and coworkers celebrations, rarely is a cake made for poor me (Sam ).

Donna took a picture of me and my helper when I was putting my grandmother's secret recipe meatballs together,yesterday, I made about 25 or so. They turned out great, my son will eat them like treats watching TV at night. 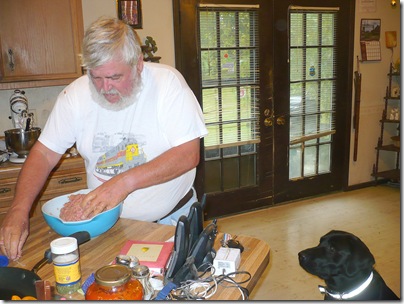 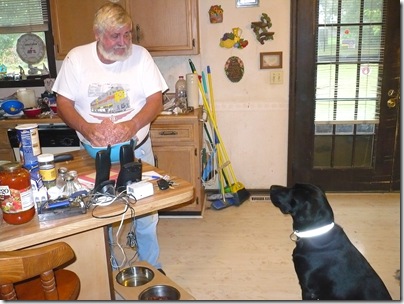 I managed to get John Deere woke up early and he & I went out with a chain and dragged the tree limb that was blocking our drive back into the back acre next to the burn pile.

Tomorrow I will make a list of what we need to stock the trailer for the Rally Thursday and will get that stocked so that Wednesday night I can hitch up and turn the trailer and have it facing out and ready for a morning departure for Columbia MO. it is only about 90 miles so we will be there in the morning hours after about an hour and a half ride.

Thanks again to Rick, Rick & Paulette's RV Journal. yesterday when I was downloading some pictures from Donna's camera into my desktop, I somehow lost the pictures in Picasso after I had thought they were imported. I then deleted the SD card in her camera. Imagine my surprise when I went back to Picasso this morning and no pictures, Well I did what any quick thinking blogger would do I remembered Rick had mentioned something awhile back about him recovering some after he did the same thing. First I went back through a bunch of his blogs but couldn't find it, Then I fired off a help e-mail to him. Then finally I did what I should have done first and look in his Bloggers Survival Manual. and there on page 82 was exactly what I was looking for with a link to download the program he used. About 15 minutes later after downloading and running the program I had my pictures back from the SD card, and I fired a cancel the help e-mail off to Rick again. He did answer right away and said he was just getting ready to send me the information when he received the second e-mail. Rick to the rescue again, What would we do without him?

Well I guess that's enough excitement for today. I am going to see if Rigg's wants to take a short walk and then me & him will take a short afternoon nap, being retired is great. Be safe out there. Do it to them before they do it to you. Sam & Donna.

Posted by Sam&Donna Weibel at 2:03 PM