We were up at the usual, 04:30AM had coffee and made sure we had everything we needed packed in the trailer. About 06:30AM We decided since the sun was coming up that we would head west.
Has a nice sunny drive to Columbia MO. and went to the Boone County Fair Grounds where the Rally was being held. 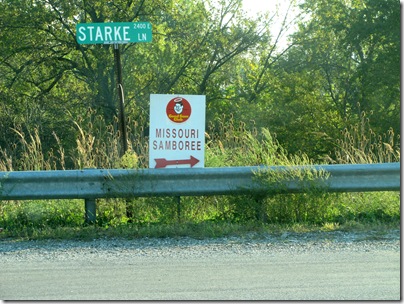 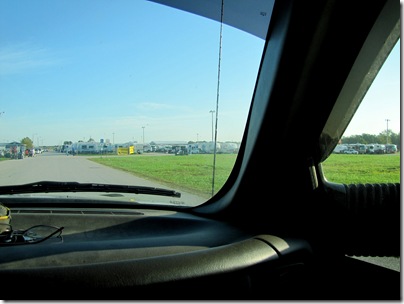 The Fair Grounds..
When we pulled up we had pre-registered but we were told there would be a delay because of a broken water line, after about 30 minutes they took us to our spot and I unhitched and setup, when I was setting up I found out that the water hydrant for my spot didn’t work, just then the neighbor in the motor home on my left said “hey if you have a y connector you can hook up to mine it works,” That’s what I did so we now have water & electric. Nice to have a good neighbor right off the bat, like that. 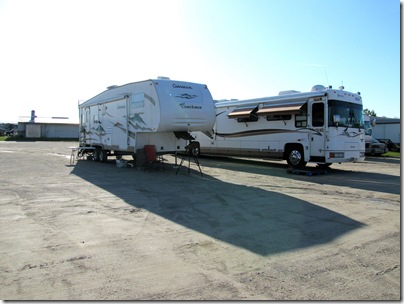 Our spot, Good Neighbor on right shared his water.
The lot we are in was empty when we parked next to the  MH but the Good Sam Rep said it should fill up today, they have two other fields all ready full.
After we were settled in we went up to the main hall and signed in, Sam won a nice hand made napkin holder as a door prize and Donna turned in her cakes and they said they would be the main prizes in Cake walk. True to there word they held Donna’s cakes until the last two draws and people were waiting for a chance to win them. 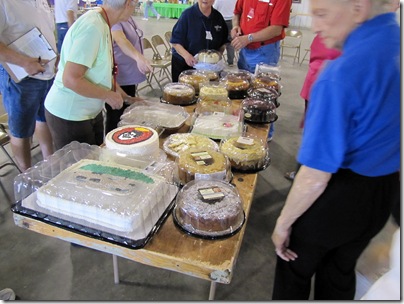 The Cakewalk Table, Donna’s two are at lower left. 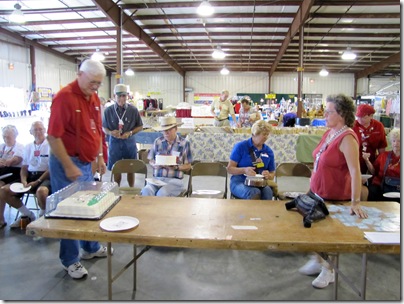 The Big Prize of the Day. 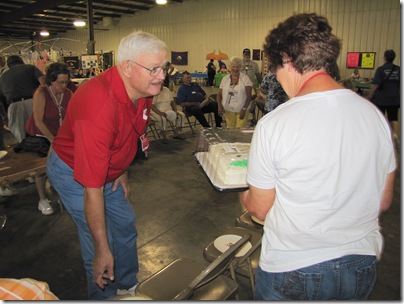 The Lucky Winner..
For all the Quilter's out there here is one that was being raffled off.. 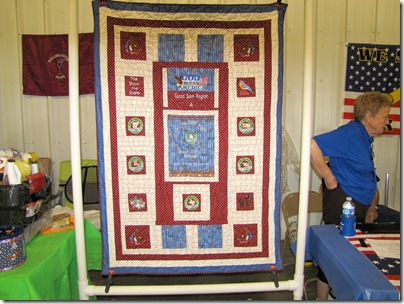 Midwest Rally Quilt.
Rigg’s is signed up for the costume parade, and the tricks contest. They will be held on Saturday, so he will have time to practice.
We are going to rest until 06:00PM when they will have an opening ceremony and a Veteran’s Recognition. Sam will try to hide for that one.
So Far so good have met a lot of nice people so far and haven’t had a happy hour or a drink yet.Be safe out there. Sam & Donna.
Posted by Sam&Donna Weibel at 2:01 PM