The day started for me early, Donna slept in until about 06:00AM by which time I had my morning allotment of 3 cups of coffee, since it was Saturday I put the octane booster in two of them.

Donna has the restaurant tonight so I hope she isn’t going to tackle any outside work like tree trimming or such and then go to work after that. I should have never got her that chain saw for Mother’s Day, Now she thinks she’s the only one who can use it. I told her I will fire up my big one once the weather cools down and we will try to do some trimming.

I think I mentioned that we decided that we would put off our planned fall trip to Florida and any Rally’s until the money situation improves. Would have like also to go and visit Kevin & Ruth in Mexico. But that will have to wait till next year. As you all know we have my Son Andy & his girlfriend living with us along with Nicole, Samantha’s daughter, So of course the grocery bill is now for two families instead of one. They both have been out of work but last week Samantha found a job, not the best, but like I told them sometimes you have to take what you can in life, Andy started this week at a landscaping company. So maybe things will improve. Samantha was eligible for food stamps while she was off so she helped with milk and the stuff you could get with those.

Once they are both on their feet, we will resume our quest for affordable health insurance or Cobra what Donna has now and she can retire and file for social security.

Then we will either sell the house to them or rent it to them until the commercial property market improves.

Gas in the St Louis area was at $2.99.9 for unleaded, diesel is still $3.37.9 this is supposed to be the cheapest in the country and the paper said it is a sign of a rebounding economy. How about some jobs now. That young people can afford a house and place to raise a family.

Got this from one of my old Navy Buddies who flew with my old Squadron HC-2. 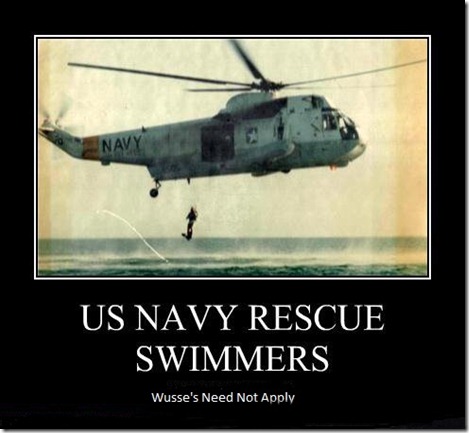 We used to free fall, (jump) from 20-35 feet depending on the sea state. It was almost like landing on the ground, the higher you were the harder you hit the water.

Ah to be young again, had a couple of comments on my search for a watch that was water resistant to 100 meters, There are a ton of them out there good to 25 meters(that’s the one good for beaches and pools) and then a smaller number good to 50 meters, but darn few good too 100 meters. That was the standard we used in my Navy days and and I always kept that standard. truth is it’s been along time since I scuba's anywhere near that depth and will probably never again go more than 25 meters due to my blood pressure and diabetes. But I did find one and bought it just to keep up to my old standard. 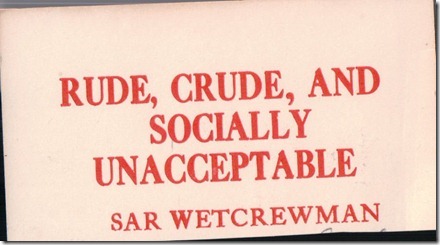 Another sign from my Navy days, after 12 hours in a wet suit you could appreciate the full meaning of this, we used to peal those things off under a running shower, boy were you ripe.

On a rescue helicopter there were two crew members , the wet man(swimmer) and the dry man (hoist operator) they alternated each day and both were qualified crew chiefs, and were rated in a craft, in addition to being air crewman.

We had a nice sunny day again only go to about 66 degrees today but a nice day none the less. Hope everyone is enjoying their weekend. Be safe out there. Sam & Donna…..

Posted by Sam&Donna Weibel at 6:47 PM