As usual we were up at 04:30AM and the coffee was hot and ready, my bride and I had a cup and sooner than wanted it was time for her to head to the truck company and then the restaurant.

It’s been cloudy and threatening rain all day, didn’t get anything outside accomplished, but Rigg’s managed to give me a scare.

I had gone into my room for an hours nap and when I came out Sadie was by the kitchen door doing her spins that she does when she has to go out and pee. After I put her out I thought usually as soon as Rigg’s hears the door open he comes running too. So I thought I ‘ll bet he’s snoozing on the couch ,went in the family room and no Rigg’s, I then thought I would check the basement to see if he had gotten down there somehow although he doesn’t like going down steps, no Riggs’ I checked the upstairs sewing room ,no Rigg’s. Now I am beginning to worry, I checked the bedrooms and then even went out the back outside and called and he had not gotten out somehow. I went back in the house and called again and then I heard a little scratching noise in the hallway, I then noticed the hall bathroom door was closed, it was locked, when I opened it you know who came flying out, he had gotten in and managed to lock himself inside. Have to admit I was more than beginning to worry. I don’t let him run loose although yesterday when I went to bring him in from his run he had about 3 feet of cable hanging from his collar where  it had broke, and had still stayed for who knows how long in his area without wandering off. I made a run to Petsmart to buy him a new cable.

Donna thought you would like this, since I’m not a big card shark I don’t understand it. 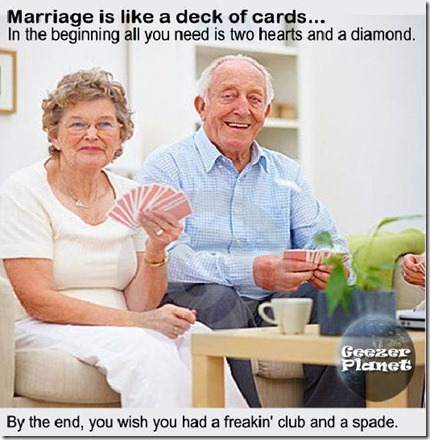 Rigg’s and Sadie & I are anxiously awaiting the arrival Of Nicole home from school. That always adds some life to house and it add’s fun to the Mutso’s routines.

That’s about it for today, I hope everyone in blogland is having a good week. Be safe out there. Sam & Donna..

Posted by Sam&Donna Weibel at 3:40 PM