Was up at 04:30AM with my pretty bride and had our coffee. Then she was off to the Truck Company and the Restaurant. Rigg’s and I had our nap. When I went in the kitchen Rigg’s was waiting by the pantry door, just in case I had forgotten where his doggie food is stored, I got a cup out and put it in his dish.

Haven’t heard from Adam, so I don’t know if he is coming over this weekend or not.

If he does come we have to have a talk about a text he put on FB about school being boring. I know he is an honor role student, but he shouldn’t be bored.We are having another great day here in Dardenne Prairie.It’s sunny and in the 50’s already. I just went down and took the charger off my generator and fired it up. it started right away and I let it run for about 30 minutes under load. Hopefully now it will be set for our first trip unless we have some below freezing weather and my Son leaves the truck out side again. It doesn’t take long for the cold to run that little battery that it has. I think this summer I will replace it with a lawn tractor battery which is about twice the size of the one that’s on it now.

Here is a picture of my Granddaughter Allie’s Subie. She just put new wheels on it and is really proud of it I see she also put a set of those Miata Blaster horns in the grill to get her through New Jersey Traffic. Were so proud of her, She’s in her second year of college and working too. 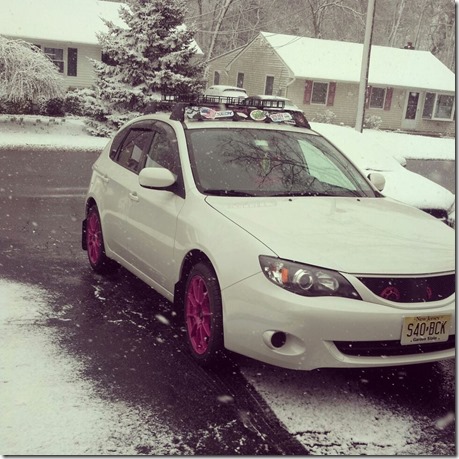 Well that’s about it for today, we hope everyone had a great weekend. Please be safe out there. Sam & Donna..

Posted by Sam&Donna Weibel at 2:49 PM