I GAVE A BAD PRESENT

Sam started feeling sick last night, apparently same thing I had. He has been in bed all day, only getting up long enough for more meds…Sorry Honey. My biggest concern is being diabetic he should eat, but as  I know you sure don't want to.

I took Paul Tempestas advise and did nothing today, so my dirty house is all his fault and Charlies.  I straitened up a bit, but floors really needing mopping after all the rain we have had here and dogs and kids coming and going. Today is Samantha and Andy’s only day off together so they were out most of the day. Good they are gone Sam is in bed, I’ll mop. Sounded good, but Charlie had other ideas. He barked and barked at mop, tried to kill it a couple of times, then when he discovered that the floor was slick when wet, well he made it into his own personal slip and slide. It was hysterical watching this little imp. He’d go down hallway get a running start put on brakes and do donuts on the wet floor. then repeat and repeat.

Riggs was behind closed doors with Sam, poor Sadie all she wanted to do was lie in her bed and watch out door for mom and dad.  She does not like Charlie very much, he’s a little too rambunctious for her. 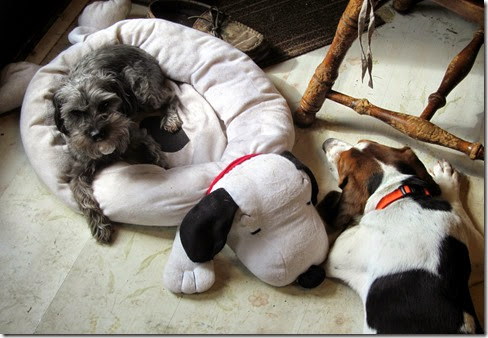 Here he is giving her the play with me look.

Well when that didn't work… 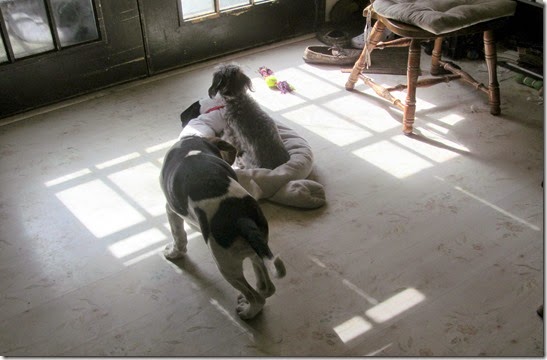 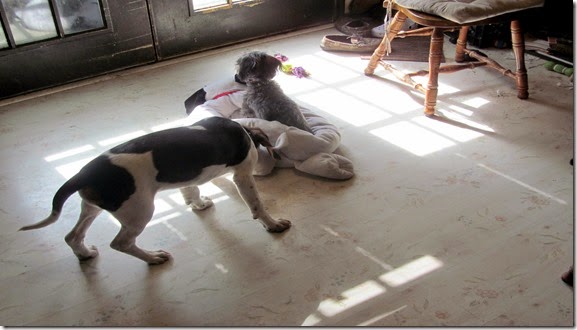 He took her for a ride around the kitchen!

There must be twenty toys between kitchen and hallway, but he always finds something he isn't suppose to have.  You can just look at his eyes and they have the “I’m going to get into anything and everything I can” gleam.

Andy and Samantha took him to vet to get his shots and a check up. Being a stray did not know if he had shots or not but they wouldn't take a chance. Vet confirmed what I said, about 5 months old and 25 lbs (and a cutie) .

Not much else going on, hope my sweetie gets better fast, he always seems to get hit much harder with colds and flus than I do.

Be safe, Be well

Posted by Sam&Donna Weibel at 5:27 PM