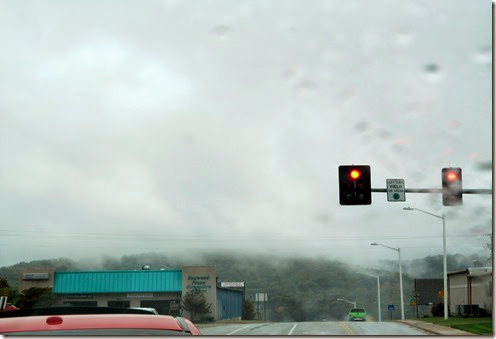 Sometimes the driving can get a little tricky with the heavy fog. Branson has lots of curvy winding roads that go up and down these mini mountains. Would love to be able to get out and walk around and explore some of the shops but weather is just too nasty.

First on agenda today was the TWS (Together We Serve) groups tour of the military museum. If you are a history  buff lots to take in. Uniforms and weapons galore from WWI to Gulf War. They have the names of all the soldiers killed in action WWII on the walls.  Stated that if they listed the names on the walls of all that were killed during the war including the Jews, Germans, British etc, the wall would stretch 7 1/2 miles.  Don in our group found the name of his uncle on the wall. 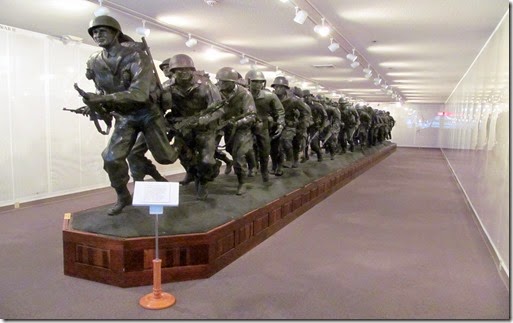 You can see some of the walls with names on them. 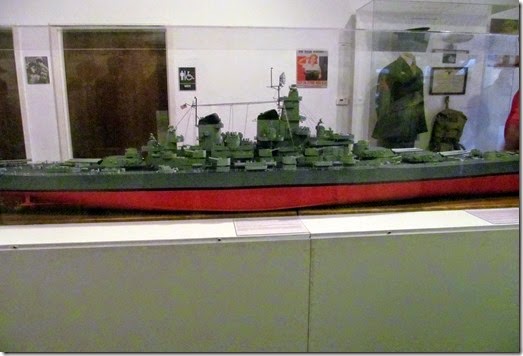 Next on itinerary was lunch and tour of the School of the Ozarks. Since we were just there this summer with my brother and weather is so yuck we decided to skip this part. This is a worth while stop when you are in Branson. Food is all fresh and such a huge variety. Its a tough school to get into. The entire place is run by the students. There is a working farm, dairy, cattle etc. All students must work from ground keeping to serving in the dining hall, but when they graduate they are debt free. All work goes to their tuition, so none of this graduating and being hundreds of thousands of dollars in debt.  As I said we skipped this part and just ran some errands. We had lunch 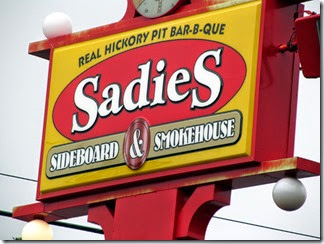 Rather disappointing. Only a couple of others there and service was very mediocre. I had lunch buffet as I was starving. Food ok but for having just been put out was just barely warm. The cobblers were almost all crust and you really had to search to find the berries. Sam got a burger and was just ok.  But with a name like Sadie, in honor of the pooch at home how could we resist.

The farewell dinner was at six. The meal was first class, wish I hadn't eaten lunch so I could have enjoyed more of it. Petit filet, chicken breast with white wine sauce, roasted potatoes, broccoli and carrot veggies, hot hard rolls and carrot cake for dessert.

Branson is a very vet oriented town and were many other groups having reunions. One of the gals from group went out and snagged a guy to come in and take pics of our group.  Poor guy was given half a dozen of different cameras to use. Sam had to be seated as with him on end the guy couldn’t get everyone in frame. 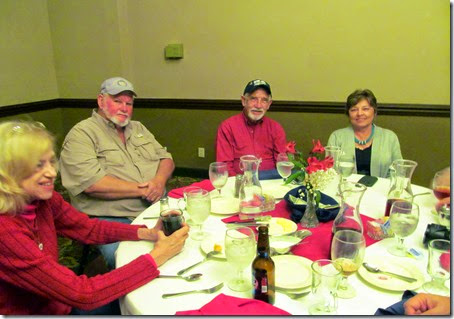 Me, Marshall, Don and Carol. 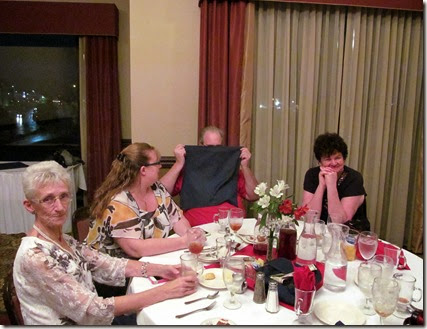 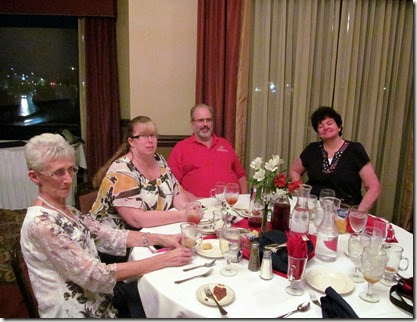 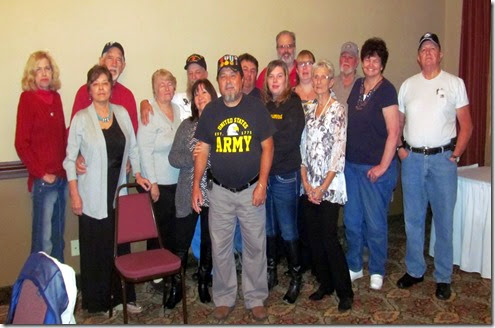 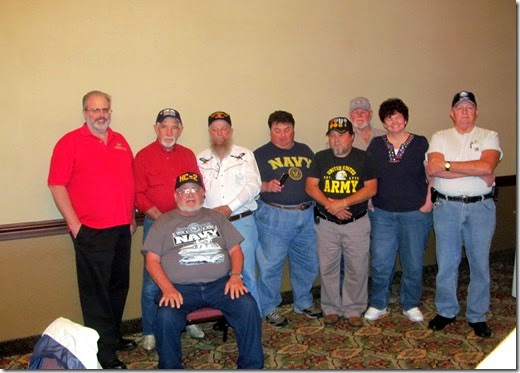 Dianne planned the entire thing, hats off to her as you all know it is not easy to organize something like this. Next year is suppose to be in Virginia. Though the group was small the organization is large.  Many of these people traveled long distances to be here. Represented by Louisiana, Texas, Pennsylvania, Michigan, and Kansas City.  Good time was had by all, lots of jokes and stories about service, these guys, and gal, all really enjoyed being young and being in the service, from jet pilots to supply clerks.  Hugs and kisses all around and we called it a night.

Turns out ones that went to the college had their lunch but declined the mostly outdoor tour because of the weather.

Today is a free day, so we will do a little shopping, again weather sucks, and plan on going to the dinner show at the Dixie Stampede tonight.

It rained all night again and some the acorns sounded like little mini bombs hitting the roof, at first Riggs went into high alert and then after a while got used to it.  I’ll say 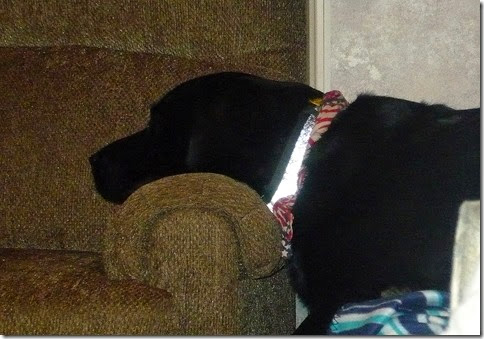 Posted by Sam&Donna Weibel at 7:35 AM