After a great day Saturday, we got up to a beautiful Sunday morning, after coffee, the sun came up and it was a pleasant 65 degrees. I waited until about 09:30am and then went to lake Sherwood to pick up the 5th wheel, my son Andy really surprised me as the trailer was sitting with the awning up and stowed the way it should be. I have a third rafter that is a support for the middle of the awning when it is rolled up and keeps it from unrolling. He called last night and was having trouble putting it up when a storm looked like it was coming in, but after instructions over the phone, it looks like it was done right. I of course checked it this morning to make sure it was properly tightened. he even had the slide in and all the movable stuff stowed like Mom and I do before traveling, The only thing he missed was the TV antenna which was up and I saw that as I drove up, I did have to disconnect it from the water and drain and store the hoses. but I had told him to leave it hooked up in case I needed water for anything when I came out today. This is the first time anyone even family has camped without Mom & I present so you know I was a little worried, The last thing I told him was don't forget this is your Mother and my home, so take care of it. 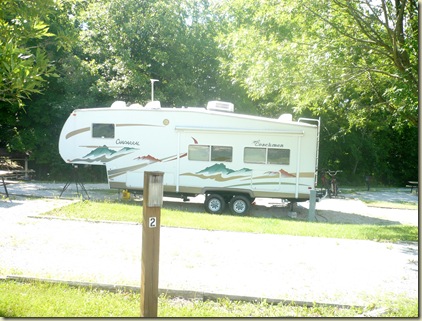 Trailer in pull thru spot at the lake

I got home about 10:45am and put the trailer on it's pad at home and plugged it in, I then went in and got John Deere running and went out to cut two weeks worth of hay, About 1 1/2 hours into the 2 acres John sputtered and I knew immediately that I had not looked to see how much gas was in it and now it had run out. i walked over to the barn, and picked up the can with the mower gas and of course it was empty, don't you just love it, your hot and sweaty and now you have to run to the filling station for more gas. I got the gas and left the windows down in the truck and no air conditioning so I wouldn't be tempted to quit in the middle of cutting. I had about another 45 minutes of cutting and then it was done, went to the barn to get the weed eater, yep, it was out of gas, I couldn't find where my son put the 30/1 mix gas can so that was the end of the grass cutting for today, I will have to go out tomorrow and re cut it again to get it mulched up and looking pretty. He and his girlfriend had some kind of concert tickets so we won't see them till tomorrow. From what I hear the camping trip with the three kids was a success, I am sure Samantha's two will want to go with Grandpa Sam camping when Adam goes again. But my theory with kids has always been the more the merrier, And when they go with me I never have any trouble with their behavior, Donna claims it's because we are all the same age.

Donna had to go into the restaurant from 10:00am to 03:00PM to fill in for somebody, I plan on either going out to eat or picking something up so neither one of us has to cook today. Hope everyone had as good a weekend as we did. Be safe out there. Sam & Donna.

Posted by Sam&Donna Weibel at 2:47 PM