Today started as usual at 04:30am I went in the kitchen and took my pills and poured my coffee and I noticed my bride Donna was sitting in her usual chair in the living room watching early AM TV, When I came in she looked really tired and I said "are you ok hon.." That's when she said not really I didn't sleep hardly at all and I feel really tired, I already called and told them I wouldn't be in to work today. This always scares me because Donna doesn't miss work for anything, and I remember all to well her heart incident where she was tired and ended up with three blocked arteries. Anyway she laid down and slept until around 09:00am. Today was my every three month checkup at my doctors so I talked Donna into coming with me since she uses him also. Well thankfully everything was fine my numbers were all good and Donna is feeling a lot better now.

So after the doctors visit I  asked her if she would mind stopping at the camera store with me as they had called and told me what they would allow on my old 35mm equipment toward the Canon I was looking at. It isn't the biggest but it was what our budget could afford and had all the features plus HD video and stereo sound.

The trade in brought the price down some more and we could afford it and a three year replacement policy that includes even if its dropped or mishandled, that is always good for a spiller first class like I am. Anyway here is the new hot setup for the Weibel clan. 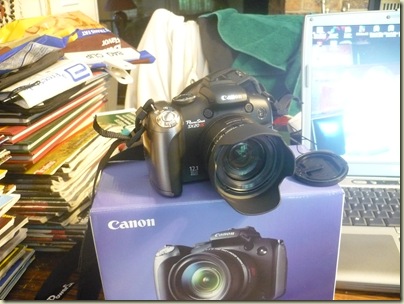 I spent the last week getting reviews on it from sites on the internet and it has a lot of satisfied users, in fact there was only one negative response and it was over something I would term not important to me.

Now I will have to enroll in a college level class to try to figure out what everything does, it has buttons for everything including fireworks. Oh well 40 years ago I remember having to deal with light meters and exposure settings and fill flash, and darkroom procedures, so I guess this is welcome to the digital world, Boy the little Lumix is so simple to run. That by the way is what took it's big brothers picture above.

I felt so good about the day that I took my bride to Bob Evans for a nice hot lunch on the way home, I told her if she had a full belly and took a nice nap after lunch when we got home she would probably be back to feeling her old self in the morning, she did take the night off from the restaurant too, so maybe she will be rested.

Now that's the big news from Dardenne Prairie, Oh yes Judy from Travels with Emma asked me in a comment about if Donna & I were still going to go fulltime this summer, Well the answer is, we would leave tomorrow if the house sold, but the economy just isn't helping us and as others who have gone through this recently know The date might get pushed back unless we get either a sale, or some other opportunity avails itself. I might have to amend the ABOUT US to reflect this later in the summer. But Our plans are YES we want to fulltime, so we are being as patient as possible and starting to clear out closets and make little preparations for when we do sell. Thanks for everyone's concern. Be safe out there. Sam & Donna.

Posted by Sam&Donna Weibel at 2:51 PM