Up before the sun at 04:30am, made my coffee and sat outside the trailer to enjoy a beautiful Iowa sunrise, experimented with a few shots on video using backlight, I will see how it looks tonight, after a dearth of trains yesterday, I found out they had a washout to fill with rock along the river west of here, about 05:00PM I saw a work train with side dump cars some still filled with large rock heading back to Fort Madison, sure enough the dispatcher started calling trains to go west and trains started passing, one about every 15 minutes, since it’s double track it didn’t take long for the east bounds to start and until it got to dark for pictures they just kept coming. You can shoot video way later than pictures so I shot until almost 09:00PM and then called it a night, I won’t stay out that late tonight because I will have plenty of video to edit.

I am in the last spot nearest the railroad tracks so I can set my tripods up right behind the trailer. 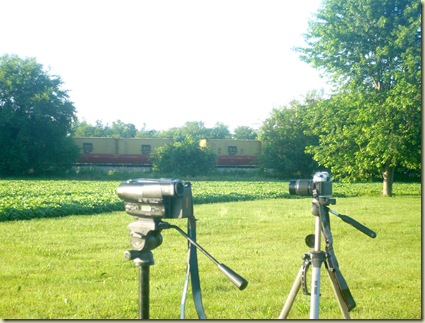 As you can see they planted beans right next to me and they are about a month old and still not to tall, I came up here one year in August and it was corn year and you couldn’t see over the corn so shooting from the campground was out of the question, plenty of spots along the tracks close though. 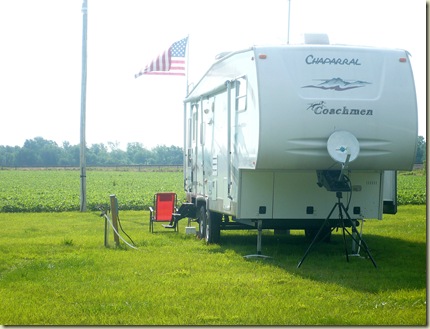 The campground only has 30 spots and about 15 of them are taken, mostly by young guys who are working construction in the area for the summer, Iowa is doing a lot of highway work in this area. Several of my neighbors have dogs and since I left Rigg’s home I told them I would check on them and make sure they had water since it’s going to be about 89 degrees today. 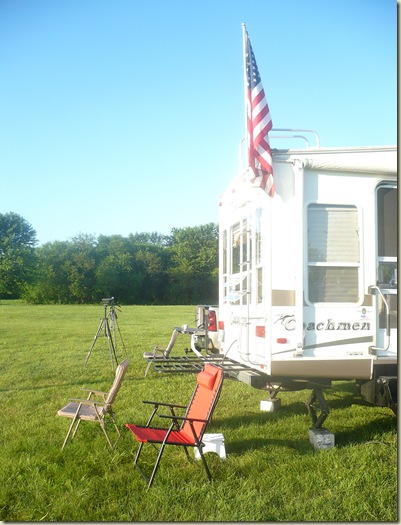 The guys all liked my $3.00 flag holder, from the ground it looks like silver plated metal, they were surprised to find out it was PVC tube painted with chrome paint. This is Good ole boy, God Bless America,  simple country living in this area and almost everyone here has someone who served their country in the family.

The pictures above were taken about 07:00am this morning and it was already 75degrees. As you can see the trains never stopped all night, but I slept through it without waking.

Had an offer to take one of the guys canoes out with him tonight before it gets dark and as hot as it is I will probably take him up on his offer, I told him I would put a couple of cold ones in the cooler as my part of the deal. The slough we are on is probably 100 acres so we can stay out of the river current and still have a big area to wander around in. The road 53rd St that the campground runs off of (241st St) dead ends about 1/2 mile from the entrance way and Lee County has a boat launch and little park area at the river. The slough ends there, and they have a little inlet dredged to get boats into the main river channel.

Well that’s about it for now, Later today I will take this to McDonalds and post it and check my mail. Be safe out there. Sam & Donna

Posted by Sam&Donna Weibel at 1:22 PM