Up early and had coffee with my bride, then she headed off for the restaurant, and then tonight at the restaurant. I checked out the blogs and then about 08:00AM called the RV Dealer where I bought my fiver, they did not have any key blanks for my Coachman, but the parts man knew of a place in St Charles Mo, & a place in Warrenton Mo. where the locksmith might have the blanks, I called the St Charles one and after giving him the name on the keys he said he could do it. So I told him after the rush was over on I-70 I would head in and have it done. 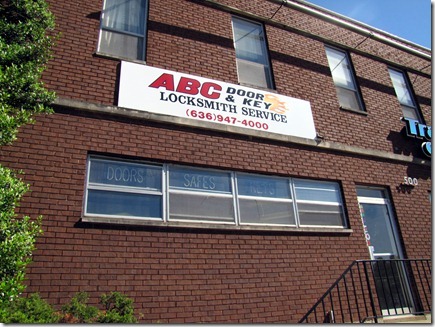 ABC Door & Key.
I left the house around 09:30AM and drove the twenty miles to the locksmith it was located in Old Town St Charles just off 5th St.
After about 30 minutes and $13 dollars later I was on my way home with a new set of 5 keys for the fiver, when I got back I tried them all and all but one, the one for the storage doors worked, he must have accidently cut two for the entry doors as they look the same. But the storage doors are a common key so I will be able to have it cut at any key machine. I think just about everyone's RV unless it is extremely high end has the same key as mine has opened a lot of my friends when we tried them.
So that was it for my quest and now were back to having a spare set. I spent some time on the laundry detail and now I have to decide if I want to take the fiver to Columbia Friday and spend the night at the fair grounds, The Good Sam’s Military Chapter I belong to is having  a meeting for the year on Saturday, I can stay for 12 dollars a night or I can drive an hour each way and just attend the meeting. On one hand I know it wouldn’t hurt to have a shakedown cruise in the trailer before we leave for vacation, but on the other hand Donna is working Friday & Saturday, so I would be alone and it really isn’t that far. I guess I can wait until tomorrow to decide.
We had another hot day in the upper 80’s and it looks like the next three will be in the 90’s. that should help bring the Lake water up into the swimming range. Although kids don’t notice if it’s cool , Donna won’t hit a pool unless the water is in the 90’s.I can tolerate down to about 75degrees before I say too cold.
That’s about it for today, I have one load of laundry to fold and then I have to think about a quick easy supper for one. Be safe out there. Sam & Donna…..
Posted by Sam&Donna Weibel at 4:32 PM