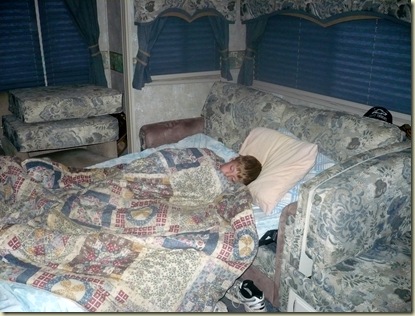 Adam, still out after a hard night of playing 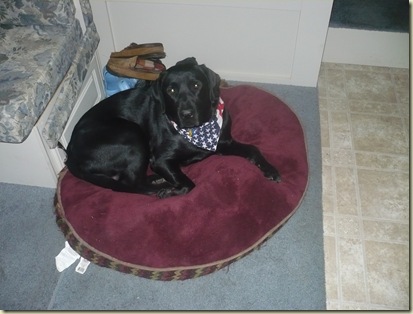 Adam arrived yesterday afternoon right before supper, happily his Mom brought his bike with him and he was off to make new friends after a quick “hi Grandpa” and he was reminded of the rules. I always have him put an FRS walkie talkie on his belt so Grandpa can get a hold of him and make occasional checks on what he is doing. I can see the playground and the entire loop road from my campsite but this just gives me peace of mind and reinforces to Adam that he is still accountable and being watched for his own safety. Donna thought he was to young to take care of a radio, but my theory is at 8 years you should be learning responsibility. I called him to come in and get some supper and then he went back to the playground.

Just before dark Grandpa started a campfire, Adam had to have his bike back to the trailer by dark,As it got dark, I called him on the radio and he answered. I had to chuckle, I said ” Grandpa to Adam , Time to bring the bike in”, I heard him answer “ten-four Grandpa”. Since I was already retired from the PD when he was born, he must have learned that from television.

Rigg’s is one happy camper, he’s made several doggie friend’s, the family next to us in a popup has a 5 month old Black Lab pup, I was surprised how gentle my bull in a china shop is with the puppy he licks him and is careful not to be to rough.

Later today I will get the compressor out of the truck and inflate Adam’s water riding toy, it is a vinyl small jet ski with a battery powered motor that also sprays a water cannon out of the handle bars. It takes 8 of the big D cells. Poor Rigg’s will have to wait for us on his run at the campsite while were at the beach, since dog’s are no longer welcome there.

Also a run into Washington MO has to be made to the Wally World, as Adam’s Mom forgot sunscreen and socks and he needs a shirt to wear while he is at the beach as he is still peeling and recovering from last weeks sunburn.

This afternoon Adam & Rigg’s and I went to the beach & clubhouse area, Adam hit the beach and the pool and Grandpa and Rigg’s stayed in the Air conditioned truck and watch the beach crowd, 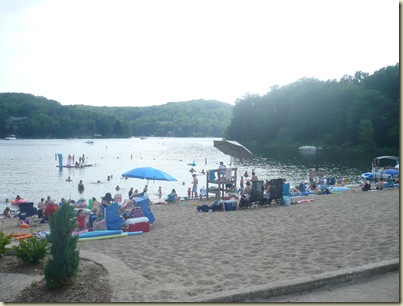 The beach scene,to crowded for me.

So now I am at the office getting this posted, Be safe out there. Sam & Donna..

Posted by Sam&Donna Weibel at 5:13 PM