It was up at 04:30AM for Sam make the coffee so it would be ready when Donna got up, she came home early from the restaurant last night feeling sick, for her she must have been really sick, as she rarely lets something like illness keep her from her appointed rounds, where did I hear that before? So this morning she slept in a little while,

I kept away from her while she was recuperating, and found some things , like cleaning the K&N air filter in her Ford Escape and after it dried in the sun re-oiling it. I then went out to the trailer and fixed the one bedroom window that was stiff to open and close, somehow it was hitting the edge of the frame on one side and some gentle taps on the outside frame, not the window with glass frame, evidently adjusted it as it now opens and closes like a new one, if it can be fixed with a hammer , it can't be fixed. After that more piddling checking this and that. I may take it up to the Lake and get a spot at the campground before the weekend rush and then I will have a place to shake it down this weekend. It will also be nice to see the crowd I used to spend every holiday weekend with and Donna said she might be able to spend Sat and Sunday night so it looks better for us to get a camping weekend in.

Oh when I went shopping I saw a red, white & blue bandanna that just happened to be in Rigg's size, since he is a USA born Labrador Retriever I thought it would be nice to have him show his colors on a holiday weekend. 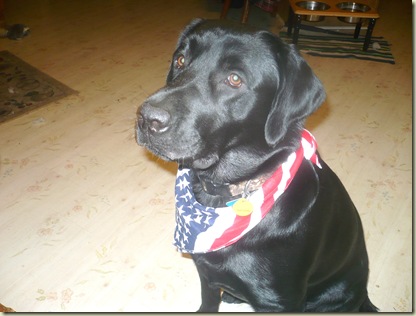 What do you think is he a USA Lab 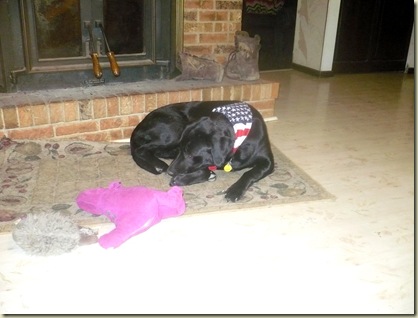 Being Patriotic wears a guy out 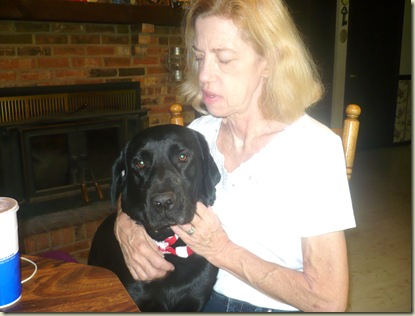 Rigg's making sure he still fits on Mom's lap

Don't worry all you guys that live up north of us, if we travel up to the Canadian side of the border he will wear his proper Labrador Maple leaf and red, I might have to have one of you guys pick up a Canadian bandanna for me though as they are not selling well here in Dardenne Prairie Mo.

This is late going out,  we missed out on meeting up with Paul & Helen Tempusta  Paul & Helens Travels to Alaska in 2010, they are also Jodie& Coco's Blog parents. They were in St Louis for 3 days and we sent them an e-mail inviting them and the dogs out. But they were staying at the Casino Rv lot downtown and they didn't have wi-fi. Got a nice response when they arrived in Iowa explaining they didn't get the message till to late. Naturally all of us were bummed out, probably including the dogs, but they might come back this way or we mat head over to where they live in Fla. if we winter in Mississippi,

Anyway that's it for today, Be safe out there, Sam & Donna...

Posted by Sam&Donna Weibel at 3:49 PM