Well so far semi-retirement is a lot of work.  Have been trying to make progress on all the clutter that has accumulated. Working as much as I did, there never seemed to be enough hours in the day to stay ahead. And boy has the stuff ( crap actually) piled up. I think it was safe to throw away the receipt from the Quick Trip for the gas and candy bar from 2004, don’t you.

Have also been working in the yard cutting down trees and shrubs that are growing where they shouldn’t be. Boy do I have a pile to burn. Can only work for about an hour in the morning because summer in Missouri has hit and the temperatures heat index has been hitting over 100. So its work outside for a while, then inside, then computer breaks.  Afraid I have a case of ADCD, you know adult deficit cleaning disorder, I have so many projects going that I work like crazy and nothing seems to get done because I do a little of this one and a little of that one. Never would have accepted that in my job, but home is different, right?

Have also queried a few fellow retirees and have found that I am not alone in not knowing what day it is. Whew that was a relief thought my brain was going already. Not having a Monday morning job really was throwing me off, but Paul being the good buddy he is has promised me that he will email me what day of the week it is any time I get confused ( that is of course after he asks Helen

Then too I have developed an addiction and its all Helen’s fault.  Have found online SCRABBLE. While in Florida at the Tempestas  Helen and I played a few games. Have not played in decades. It was a standard in my childhood home, my parents loved words and played every day. So I have been playing a lot….play 30 minutes work 30 minutes. Sounds like a fair trade to me.  I am still having trouble wrapping my mind around the fact that not everything has to be done now because there won’t be time later. Now that I am working only 20 hours or so a week lots of time left to work on things around here.

Now to our resident. We have a woodchuck (aka ground hog) living under our patio slab.  Well today as Sam was walking past kitchen door he said “well look at this”. The patio slab has a dip in it and we had a downpour last night leaving a puddle of water in the middle. Well, there’s old Woody getting himself a mighty drink.  He must be eating good as he is huge.  Average size is suppose to be 25 inches nose to tail tip, this guy goes almost 36 inches, and he looks fat and happy. 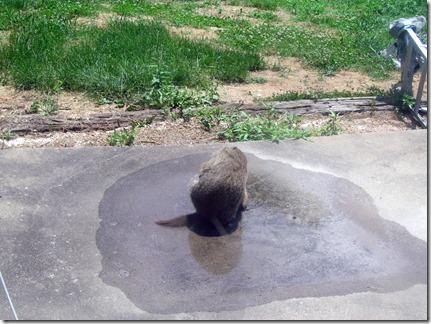 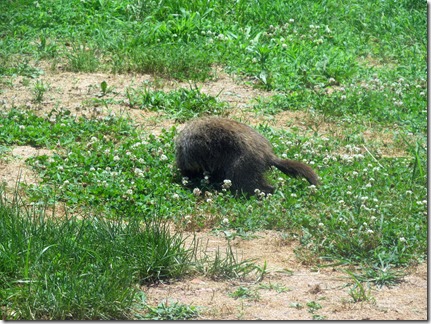 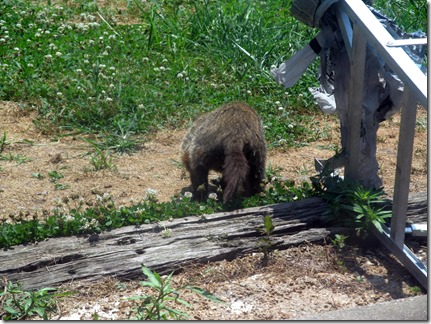 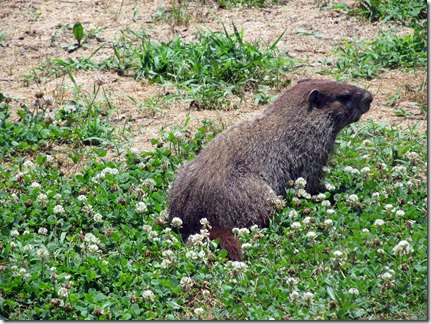 Uh Oh he thinks somethings up. Head up and sniffing 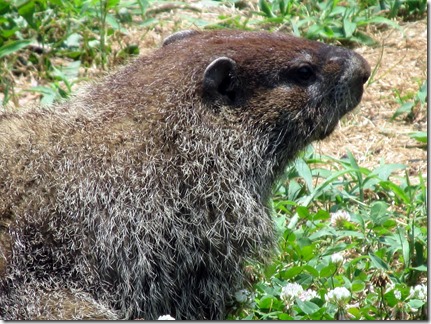 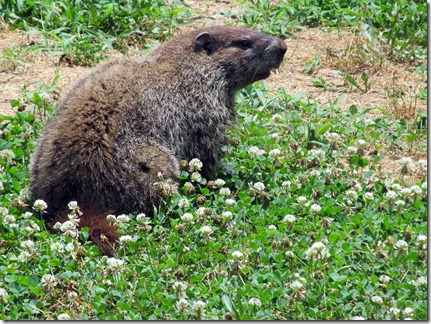 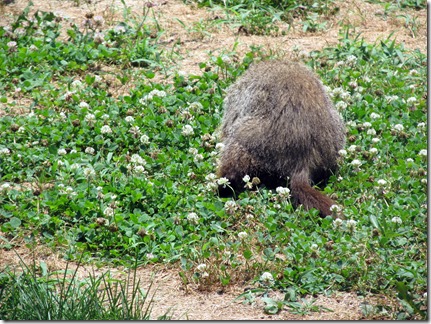 As Judy would say THE END

Posted by Sam&Donna Weibel at 7:11 PM