Well, after coffee, Donna headed to the truck company, my son Andy went to work, (Hooray he’s back to work), Grandson Adam is in school, so Grandpa Sam has the house to himself and of course Rigg’s, who will never cease demanding attention until he is so worn out he falls asleep on his rug. But have no fear after a nap he will be ready for more.

Yesterday was a lazy day, I took the truck to Wal-Mart to have four new tires put on, I have found that for LT tires they are reasonable and you can get a warranty on them anywhere in the US, (Maybe even Canada or Mexico Wal-Marts if I am lucky), haven’t read the fine print yet. Didn’t I just put four tires on Donna’s SUV last month.

Ever notice how when you are waiting for work to get done on your truck, there is a natural tendency to say, I think I’ll just look around the store. I know I can’t be the only one with this trait, but true to form that’s what I did.

I remember some time ago reading on someone’s blog about their printer going out while they were traveling and finding an all in one printer for the remarkable price of $40. Don’t know if it was at a Wal-Mart or not but I thought at the time wow that’s a hell of a deal and once we hit the road that’s what I will need rather that my two old printers that would take up the whole dinette table.

Well here I am walking up the aisle near the electronics and there on an end group is a sign This item $40, and right next to it , This item $59. On this end group under the $40 sign were Canon MP250 all in one printers, and under the $59 sign was Canon MP 300 printers.

I looked at both of them and could not see any difference from the two other than the model numbers, the fellow working there was helpful and said he didn’t know the difference either but that from what he had heard they did a good job and were selling fast. Since there were only 3 of the 250’s left I guess I can believe that.

Well I brought it home and plugged it into the laptop and ran the software and clicked on share and then tried to print, copy, and then scanned a photo. The results were great. The photo scanned in better resolution than my old flatbed scanner, which in all fairness was bought in 1998. 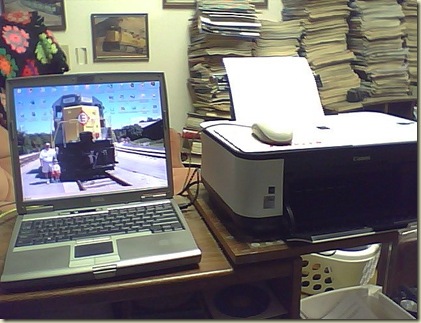 How in the heck can buying a printer take up so much blog, Anyway I have already decided it’s small enough to go in the trailer and now we can make copies and pictures while were on the road.

Oh yeah the printer when added to the new bubble levels for the trailer, and the two bags of chips, and tax made it $70 before it was over, not counting the tires. So much for just looking around.

Anyway if your need a reasonable all in one printer it works for me so check it out at Wally world. Be Safe out there. Sam & Donna.

Posted by Sam&Donna Weibel at 7:46 AM