Well, Donna’s off to the truck company, but she had to take Sam’s Duramax, her little Escape gave her trouble on the way home last night, She stopped at a convenience store and then when she backed out of the parking space and went to put it from reverse into drive it hung up in neutral and no amount of force would move the gearshift lever. Sam drove up there and he couldn’t figure it out, stepping on the brake hard, shutting it down and then restarting, the lever wouldn’t budge and the car was in neutral. Two guys helped push it back into the the parking space. The tow truck was called and it went to the Ford dealer to be looked at today, Hope we get it back today or Donna won’t have any wheels for work Thursday as Sam is heading out on a trip with the bus. 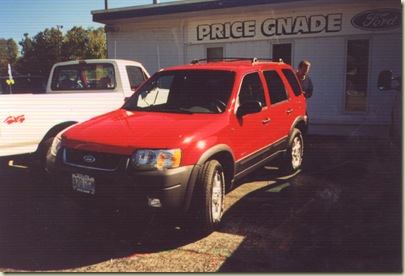 Hopefully it will be something easy to find, maybe a broken piece of shift linkage, or and electrical part in the brake pedal interlock, this is a ford product that you have to have your foot on the brake to shift it from park or neutral into gear.

Yesterday was another nice sunny day in the 80”s. Sam went out and took both batteries out of the 5th wheel to check them, the top one needed some water in all the cells, the bottom one only needed a little water in two cells, not bad for being hooked up to the post for the winter. I checked both and they both registered fully charged, I think they are both 2 or 3 years old so, I might get another couple years out of them, so far we haven’t camped much without electrical hookups.

Also got the digital TV converter working, but I found it is only good for one TV at a time. I told Donna before we leave we will measure the entertainment center and buy a flat screen HDTV for the living room and keep the small bedroom TV on the converter. That way we won’t have to switch from one TV to the other.

While I was checking the TV’s I opened the DVD to put a disk in it and found one of my train movies I couldn’t find during the winter. It had been left in the DVD on our last trip and spent the winter there. All the DVD players and Radio systems worked.

Maybe today I will sand and paint the spots on the frame and springs and underneath area that needs yearly freshening up I like a nice clean black looking bottom without rust spots.

Sam got his order’s for Thursdays trip, he will pick up some High School students in Jefferson City MO. with three other busses, they will drive to Zanesville OH. Where they will meet 4 other drivers already there, These drivers will take the busses to Washington DC. Sam and the other drivers will wait for the busses to return on Sunday and then drive the students back to Jefferson City MO. The wait is usually boring, but you are being paid to layover. I will make sure to bring the camera and laptop on this trip.

Not much going on as a load of laundry has already been put in, and Sam will catch up on some of the home stuff today. Be Safe out there. Sam & Donna…..

Posted by Sam&Donna Weibel at 7:19 AM