Was up to another really nice sunny but cool day here in Scranton, after coffee I sat around and then about 09:00AM I told my sister I was going for a ride, I had heard that the new railroad that is running on the old Lackawanna Railroad has built a diesel shop in South Scranton so I Google mapped and followed the tracks and found it, of course there was a locked gate across the entrance way , which I can’t blame the, for, railroads are very safety and liability conscious today. But by looking at Google I saw a big warehouse looking complex with a parking lot across from it so I headed there, This small railroad takes diesel locomotives from the 50’s made by Alco who is no longer in business and rebuilds and restores them to beautiful condition, Of course parts are harder to come by so they have a bone yard where several carcasses are being stripped to keep the fleet going, I was able to take a bunch of pictures and I’ll show a couple here. 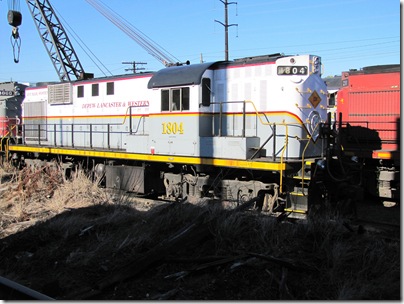 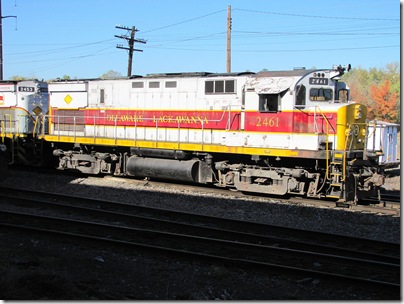 These are examples of the diesels that have been restored ad pull freight now. 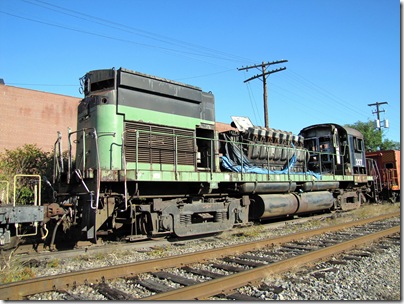 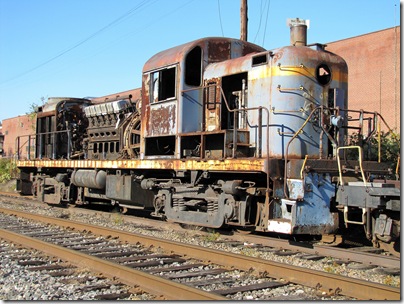 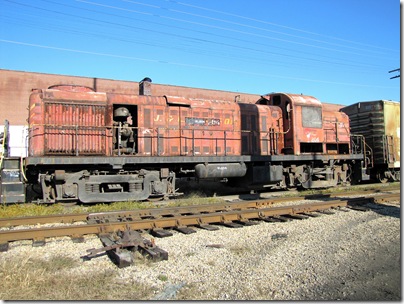 These are supplying parts for the fleet. 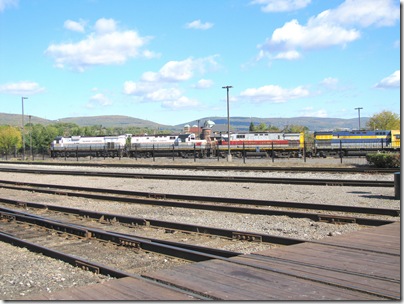 These were waiting to take a freight east out of Scranton.

After I left there I went back home for lunch and I heard the Steam town Excursion train getting radio permission to go east to Moscow PA, the engine number given for the train was CN3254, which I knew was a Canadian Nation steam engine, Got your attention, Al & Rick, so I jumped in the truck and drove to my cousin Sam Genett’s who lives right next to the tracks in the house my Genett Grandparents lived. 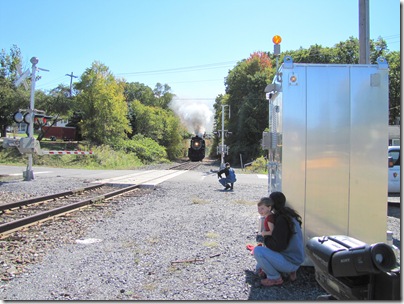 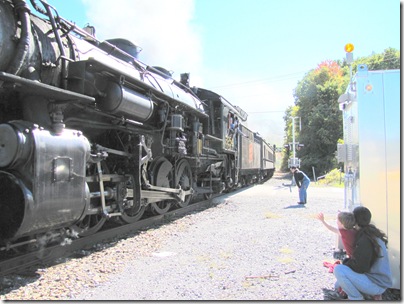 Look at the little guy, not a bit afraid, and this baby was making noise and working hard climbing a grade. 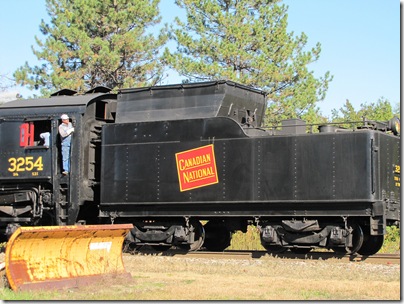 Look at the great condition this locomotive is in, you could almost eat off that tender deck. 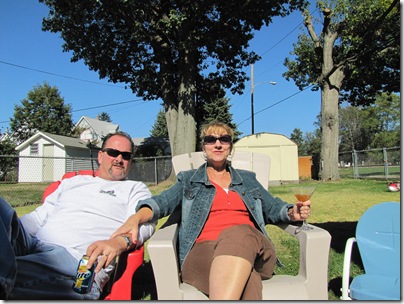 After the train went by Sam wouldn’t let me leave until we had a cocktail in the backyard and I got to play with their Grandkids, 1 boy and 2 girls. My Sister and I are going out tonight for a couple hours, so I said one was enough and I would see ya tonight.

I appreciate the comments I have received on making this trip, I think a couple of bloggers think my bride Donna is with me, I wish that was so but She, the trailer, and Rigg’s are waiting in Dardenne Prairie until I get back. Donna is still working two jobs since right now that is what provides both our medical insurance, as soon as we can figure a way the house will be sold and we will be on the road, sometimes your plans get postponed for awhile as many of you before us know.

Also Judy asked what the Everhart Museum was, On the east side of Scranton is a large park called Nay Aug Park, It is an Native American name.Years ago it had the largest manmade swimming pool in the US. an amusement park, and the Everhart Museum of Natural History. The park itself is a shell of its former self, the large pool was filled in and three small pools occupy the area now, so much for progress. The Museum is still in good shape and contains exhibits of animal life native to the PA area, and art work including Native American examples. They also have changing art displays. They area surrounding the Museum which is a large building used to have two large reflecting pools in front and the whole area was a bunch of gardens with roses and all kinds of flowers during the summer time. All this is gone I guess the victim of budgets cuts and no money.Basically besides the Museum the Park has little use other than a place to walk you dog. It’s a shame, I grew up there and had many great summers there.

Well that’s about it I can’t believe the day went by so fast, Hey be safe out there. Sam & Donna..

Posted by Sam&Donna Weibel at 4:50 PM