Started the day with coffee, did some laundry and then about 10:00 AM went down to Steamtown NP. With my golden pass it is free to get in instead of six dollars. Took some more train pictures, the steam train was getting ready to leave so I got it’s picture, I went in the roundhouse and saw that they have separated the CP engine from it’s tender prior to starting work on it, that was pretty interesting. saw the big drawbar that holds it all together instead of a regular coupler. 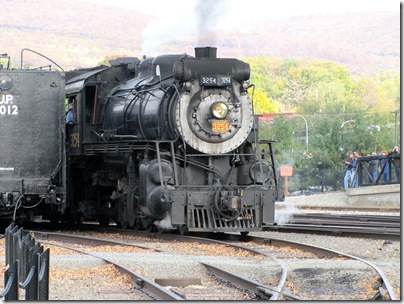 Backing over to the depot to pick up it’s passenger’s. 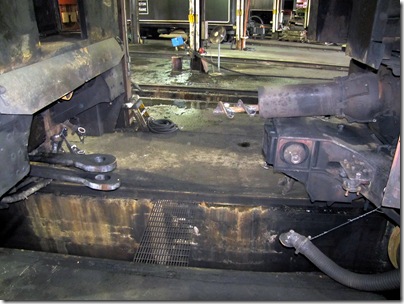 Drawbar and stoker housing that brings coal from the tender to the firebox on the locomotive.

I wanted to go up to Moscow PA about 10 miles away and get a shot of the train pulling the grade as it passed the Moscow Station. When I got up there I saw a guy waiting and asked if the train had been there, he said I had just missed it and that it was flying when it went by, Oh well.. 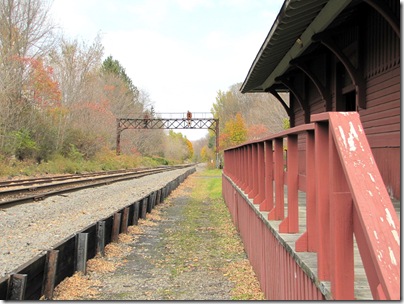 Too late, No train. 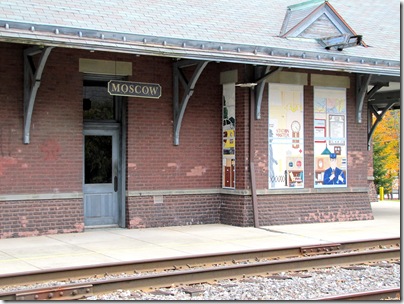 Moscow Station, We will be stopping here next Saturday on our ride.

Got back to the house and Wendy said the pharmacy had messed up on yesterdays prescriptions and they had the right ones ready now, so it was back over to the CVS drug store. I guess there’s no quality control anyplace anymore, Then when I pulled up the guy in the window said they can’t take prescriptions back, I said well then get your store manager over here because it was your mistake and my sister called prior to me coming over and were not going to pay for your mistake and then throw the old pills away. He said oh, well okay, I was just doing what I was told. So from that point on it went smooth even got $1.10 cash back.

I read Rick’s blog RICK & PAULETTES RV TRAVELS today about his spilling of his coffee on his computer desk Friday morning, I have to be really careful with my temporary work station. 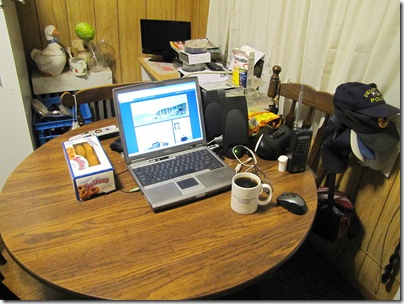 Yep the kitchen table, notice the proximity of the coffee and Plain donuts.

This table is about half the size of the one at home and the kitchen is about a third of ours, but the house is over one hundred years older.

Rigg’s I saw Blizzard today and gave him a pet for you, he was out in the yard for awhile. Hope your being good.

Nothing much else, I will be visiting my brother Ricks grave tomorrow morning by myself, just want to spend some time alone with him. Everyone be safe out there, and hug the ones you love. Sam & Donna…

Posted by Sam&Donna Weibel at 3:47 PM