Up at 05:30am had my coffee and did some blog reading,Then I had to plan my day, it was still overcast and grey so I decided I would do some home repair. My parent’s house is more than 100 years old so the basement has stone walls, no concrete or cinder blocks back then over the years it has developed some leaks and after really heavy rains, like last night you get some water in spots, not much but enough that my Dad had installed a couple of floor drains which drain it off. When it was converted to a duplex from a one family house, after my Dad died My Mom and Brother Rick had one side and my sister Wendy had the other, A wooden partition wall was put up down the center to give each side separate storage  and in case one side or the other was ever rented out. There is a wooden door made out of 2x4 and 2x6 boards in the middle, the wall has 4x4 post going from the ceiling to the floor and the wall is made of lengths of 2x6 boards. When I got there the dampness had caused the door to be  difficult to open and some of the  boards the nails were loose. So this morning I took my trusty 24 volt drill, and a bag of 3 inch dry wall screws and went to work tightening all the loose boards, I then found the post on the hinge end of the door was rotted on the bottom so I had to cut a wooden shim about and inch high and hammer it under the post so the door would raise and the post would be supportive again. Now when I go over to the other side to get my shower, (old houses have add on showers and Dad put one in the basement when he was remodeling bathrooms.) I can open and close the door without it sticking.

That took care of my morning and then after lunch I decided to take a ride down to Steamtown again. When I was a teen over 45 years ago I was a member of the Scranton Model Railroad Club. At that time they had the top floor (4th) of the Lackawanna Railroad Storehouse which the railroad allowed them to use rent free for there train layout. This is now part of Steamtown, One of the Employees is a member of the Historical Society I belong to, although I had never met him, I thought if I meet him maybe he would have access to that building and I could take a look at a part of my youth of almost 50 years ago, so with high hopes I asked a Park Ranger if Pat MaGuire was still working for them, he said yes and would I like to see him, so he escorted me over to Pat’s office which happens to be in the 1st floor of the very same storehouse. I met Pat, and told him of my wish, Pat said no problem, now bear in mind this building dates to the late 1800’s and they have gutted most of the interior for eventual restoration. Also it takes a lot more effort to climb four floors worth of steps than I remember it used to. But it was worth it a lot of memories were brought back, they still had the walk in vault where the railroad kept blueprints & papers in long drawers, which later were perfect for storing model trains. Here are a couple of pictures. 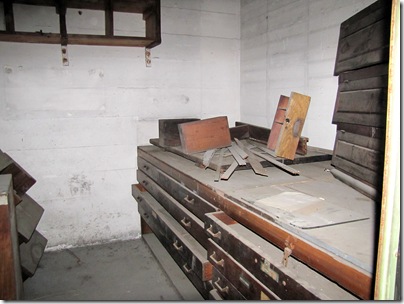 Inside vault,This had a heavy metal door like a bank vault, still attached. When we looked at the tags on the drawers some still had HO or O guage for what size trains were in them. 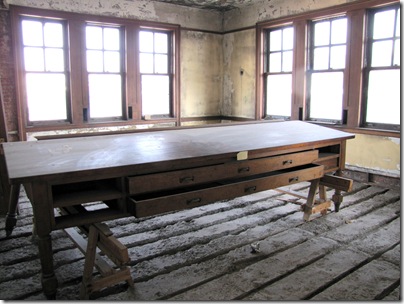 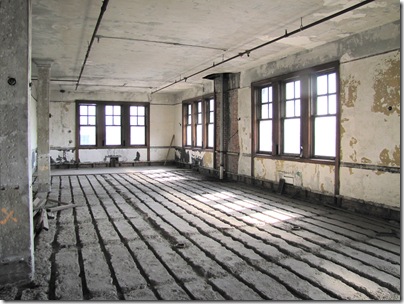 One of two train rooms we had this side held HO trains and the other side of a partition was identical in size and held O guage. Lots of room and lots of trains. 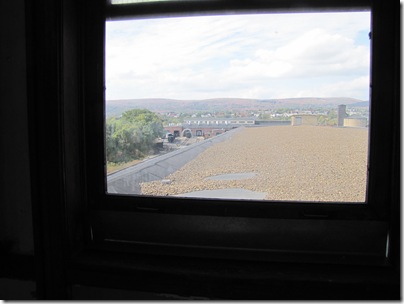 This is a view of what was our coffee room the building in the background was the diesel shop, and now houses Steamtowns shops.

I told Pat when I left Scranton I had every intention of coming back and staying in the club, I had even left several of my HO models in my drawer. Well life being what it is I married and never came back to live in Scranton and when we visited the models were forgotten and also the Club moved out when the railroad no longer wanted to heat the building so that was it. I know those models found good homes though.

That’s about it for now I am going to make my sister a pizza tonight for supper, she wants to try my recipe. Be safe out there, like my niece Tammy says. “The future isn’t what it used to be”. Sam & Donna.

Posted by Sam&Donna Weibel at 3:46 PM